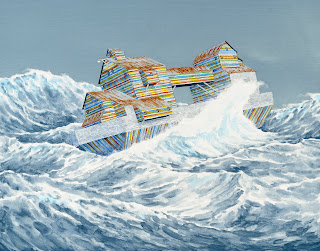 There’s some great stuff in the Greater Tacoma Community Foundation show at Kitteredge Gallery, University of Puget Sound. This exhibition of nominees and winners of the Foundation of Art Award includes work by the 25 nominees from 2008 to 2010. It is very likely the best selection of art from Tacomans you’re likely to see in a single gathering.

But there are some clunkers, too. For starters, most of the freestanding sculptures are boring. No matter the subject, they all look like scale models of houses. Among the few exceptions are a couple of colorful pieces by Nicholas Nyland: "Dog Love," glazed ceramic, and a free-hanging sculpture called "Garland." "Dog Love" is a decorative little statuette that looks like a circle of butt-sniffing Dalmatians with big yellow flowers. "Garland" is a series of ripped sheets of watercolor paper with colorful patterns hanging on rope through grommets. The rope and grommets are outsized in proportion to the flimsy paper, and it is the contrast between light and heavy media that lends this piece power.

Speaking of colorful and decorative, Mauricio Robalino’s two prints and two paintings are exceedingly bright but a bit too illustrational and cutesy for my taste.

Jeremy Mangan is represented by two paintings: "Heavy Seas" (Mangan at his best) and "Row of Sheds" (definitely not one of his best). "Heavy Seas," a tiny painting at 11-by-14 inches, pictures one of Mangan’s signature barnlike structures adrift in a stormy sea. The power of the waves and the oddness of the structure combined with the artist’s meticulous painting make for great art.

Among my favorite works in the show are four transparency print photographs by Victoria Bjorklund. These are transparent photographs, mostly of urban scenes, mounted over other photographs. The transparencies create the effect often seen in glass-fronted stores or restaurants where you see overlapping reflections and outside scenes — a natural phenomenon that can be very beautiful. The soft gray tones of Bjorklund’s pictures add considerably to the mood and the beauty.

Other favorites include a set of three paintings in aerosol, black gesso and colored pencil by Jeremy Gregory. His dark colors are marvelous. His figures are cartoonish but fully modeled. My favorite is "Return of the Breeder," a cut-out image of a horse with a woman’s face and breasts in front of a shadow-box landscape. 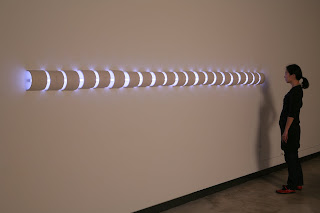 Yuki Nakamura’s "Filament Structure," porcelain and LED light tubes, looks like a Donald Judd sculpture. I love the repetitive, minimalist form and the soft blue light. But the pinhole surface decoration is superfluous. She should have let well enough alone with the strong basic forms.

Marc Dombrosky is showing what looks like one sculpture made of old cardboard scraps with words scribbled on them like beggar’s signs. The labels indicate they are four separate pieces. As individual pieces they are boring, but seen as a holistic installation they are very nice. Perhaps the confusion (one piece or four) is the point.

Kyle Dillehay’s "Lines of Earth" is an attractive piece that dominates one wall of the back gallery. Knots of root clusters extend outward in a semi-random order from a flat white board upon which is attached a box like a window flower box with dried red peppers. The root clusters extend beyond the frame and crawl up the wall and onto the ceiling.

This is an impressive show.