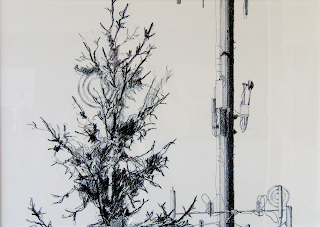 Matthew Johnson’s charcoal drawings and watercolors at Fulcrum are unassuming, unpretentious and traditional in style and execution. There’s nothing to distinguish them other than 1) the unusual subject matter and 2) the skill of the drawings. Yet I was drawn to them even from outside the gallery on the sidewalk looking in. These are impactful images.

About the subject matter: they are portraits of cell phone towers. Such towers have become ubiquitous, but I suspect that most people, like me, never pay attention to them. Who studies their form, the shadows they cast or the way they relate visually to surrounding buildings, trees and sky? Apparently Johnson does.

Johnson calls these drawings impersonal portraits, anthropomorphizing the cell towers and relating them to human personalities.  “As the cell phone has integrated into my live it has led to a depersonalization of my relationships through convenience. The towers represent my connection the world. Everyone I know and everyone I have yet to meet,” Johnson wrote in a wall statement.

There are a dozen or so charcoal drawings (I didn’t count) and two small clusters of watercolors. The visual impact is due primarily to the placement of the towers on the page and the selection of how much of the surrounding environment to include — in most of the drawings very, very little, an edge of a building or a part of a tree, the objects on the page isolated in vast white spaces.

Shading of the towers is done with few graphic marks showing but rather in solid blocks of various tones of gray and black, but the shading in other areas such as the underside of a part of a water tower in a drawing called Lowes is highly energetic in dramatic contrast to the shading of the towers. His trees, and a bird’s nest nestled in one of the towers are also very energetic, which makes sense because of the differing nature of twigs and leaves and pieces of metal and wire.

One other odd thing that shows up in many of the drawings is the use of concentric circles like targets or in some instances like a sun or moon behind the towers. Gallery owner Oliver Doriss said he suspects they represent the energy emitted from the tower. Perhaps. They are odd and out-of-place abstract or symbolic images stuck onto realistic drawings. Theoretically I object to these, but when I look at the drawings they seem to be not out of place at all.

These are very attractive drawings.