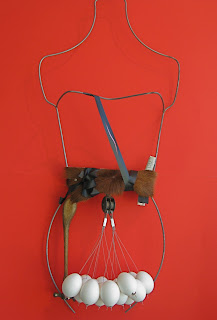 The show is called Access Denied, but it should be “Access by Invitation Only” or “Access at Your Own Risk.” It’s the follow-up to Mineral’s popular chastity belt show from a year ago.

The walls are lined with artist-designed chastity belts displayed on female-form mannequins. They express 21st century takes — mostly sarcastic — on the medieval concept of guarding a woman’s chastity. The overarching theme is that a woman’s body should never again be considered the property of another person.

Is there a difference between art and craft? I think there is, and I think these items are craft. They are more akin to jewelry than to, say, painting or sculpture.  As a prime example, two of the best pieces in the show are by jewelry maker and Mineral owner Lisa Konoshita.

They may also be seen as conceptual art in that their main attraction is the idea expressed rather than the visual form. Take, for instance, Lynn Di Nino’s" Lawsuit." It is a set of lace panties displayed on a mannequin with one of those do-not-remove/care-and-laundry labels sewn to the crotch. The backside of the labels says “This is not a toy and should be kept from children.” ’Nuff said.

The works by Kinoshita mentioned above are necklaces for the lower regions of the body made of a variety of materials and displayed on wire female forms hanging on the wall. The best of these is "The Virgin," made of eggs that hang from the crotch like baubles, a pulley, cowhide, an antique hammer, electrical tape and other materials. Each of the eggs has a silver metal tip that looks like a nipple (perhaps through association due to all the emphasis on the female body). This is actually a very attractive work of art — more like sculpture than like a necklace due to its size — that probably would not have any reference to a chastity belt if it were not in this show displayed in the manner it is displayed.

Another enjoyable piece is Fred Park’s "Shy & Excited." A leather belt is rolled into a tight circle that holds as eggs in a nest four tiny, translucent white gourd shapes with lavender pearls. It is very elegant, and it is accompanied by a humorously poignant poem expressing the wearer’s shyness.

One of the more provocative pieces is Galen McCarty’s "Open for Business," which sports a cheesy plastic Jesus hanging over the crotch of a mannequin and behind lighted neon.

The Best-in-Show award selected by Sarah Traver, director of the Traver Gallery, went to "Rape of the Land" by Daichi Koya.