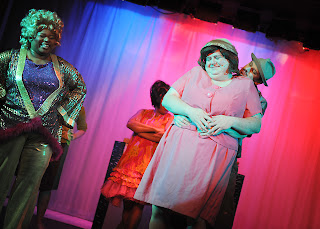 
I really enjoyed “Hairspray” at Paradise Theatre in Gig Harbor. It’s not great theater and doesn’t pretend to be. It’s light, toe-tapping entertainment with a simplistic teenage love story and equally simplistic takes on the important issues of race and body image in the fictional era when the big concern of the day was which dancer on the “The Corny Collins Show” is going to be selected “Miss Hairspray.”

Based on the 1988 John Waters movie starring Divine as the overweight, working-class mother Edna Turnblad (John Travolta in the 2007 film remake), it translates easily from film to stage. In fact, it’s more naturally suited to the musical stage.

Howard Knickerbocker plays Edna in the Paradise production, and Emileigh Kershaw plays Edna’s spunky daughter Tracy. The part could have been written with Kershaw in mind. From the plaintive opening number, “Good Morning Baltimore,” which she performs after waking up in a cleverly constructed upright bed that turns on rollers to become the door to a house, she beautifully personifies the character of this dreamer who refuses to entertain the thought that being short and fat could possibly get in the way of becoming a dancing TV star or finding romance. And it doesn’t.

From the moment of her first audition for Corny Collins’ dance show, everyone falls in love with her – from Corny (terrifically played by Jonathan Bill) to the vast TV audience in Baltimore, to the teen heartthrob Link Larkin (Grant Troyer) – everyone but the stereotypically self- centered diva Amber Von Tussle (Tia Langley) and her manipulative mother Velma (Stacee Villa).

The orchestra under the direction of Vicki Knickerbocker is larger than the usual at Paradise and sounds better than I’ve ever heard them.

Jeff Richard’s set is colorful, and the pieces easily move to make changes unobtrusive. The lighting with all of the flashing and revolving colors is dramatic and, in some of the musical numbers, heightens the intensity. In other numbers, it is overdone and distracting. The following spotlight in the opening-weekend performance often missed the actors.

Vicki Richard’s choreography is outstanding, and the ensemble dancing is good.

Many of the actors turn in notable performances. Eli Ghorley is a lovable Wilbur Turnblad, Tracy’s dad. Troyer’s moves are perfect for the slick teen Elvis wannabe, and his singing is wonderful.

Krista Curry is expressive as the very excitable Penny Pingleton, Tracy’s best friend; and Jesse Smith as Penny’s boyfriend Seaweed J. Stubbs has great dance moves and a beaming smile. Shannon Burch makes for a truly funny Prudy Pingleton, Penny’s uptight mother. (She reminded me of Ruth Buzzy as the frumpy lady in Rowan and Martin’s “Laugh-In,” who kept hitting mashers with her purse.)

The real knockout is Annette Seymour as the strong and sassy Motormouth Maybelle. Her soulful solo on “I Know Where I’ve Been” is a show-stopper that leaves you breathless.

“Hairspray” is light entertainment loaded with upbeat music that will transport you back to 1962 in a delightful way.

Anonymous said...
This comment has been removed by a blog administrator.
September 25, 2010