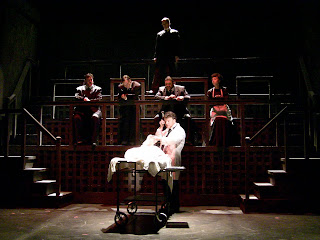 Robert Louis Stevenson’s classic horror tale “The Strange Case of Dr. Jekyll and Mr. Hyde” does not lend itself easily to play adaptation. It is too much of a simple morality play pitting good against evil. It took the great playwright Jeffrey Hatcher (“Tuesdays with Morrie,” “Murderers”) to give it the psychological depth and complexity essential to a modern literary thriller.

Including four Hydes played by four different actors – often on stage all at once to present different aspects of the same warped personality – was a stroke of genius on the part of Hatcher. Whitney choreographs the movements of these four Hydes (Mike Dooly, Caitlin Frances, Russ Holm and Frank Lawler) like a contemporary ballet. He also choreographs the movement of set pieces as if in a modern dance.

Hatcher’s other stroke of genius was to write in a love interest, not for the “good” Dr. Jekyll but for the “evil” Mr. Hyde.

The set by Jill Carter and lighting by Kate Arvin do much more than set the mood. The stage is dominated by a dark set of stadium seats that serves as a surgical observation platform and by a massive red door that is constantly wheeled about the stage.

Everything is on wheels, and everything moves in syncopation. The door becomes a dance partner to various actors, and the bleachers break apart and roll back in sections to reveal startling lighting effects.

The acting, the sets and the music are all highly stylized and abstract. Movement is constant and interwoven. There are no costume changes except for the addition of a hat and walking sticks for all four Hyde characters. And yet when Jekyll’s servant Poole (Frances) changes into Hyde, the transformation is physically convincing. Likewise, Lawler looks like three different actors as Hyde, the police inspector and the creepy surgeon Sir Danvers Carew.

Dooly and Holm, on the other hand, do not significantly change as they play their different characters. It’s hard to tell Holm’s Utterson from his Hyde, and Dooly’s Dr. Lanyon and his Mr. Hyde both have the same booming laugh.

Overall, the cast is outstanding. Aaron Lamb is Dr. Jekyll. He plays the part with intense emotion and body movements. At one point, his body and Hyde’s (Frances) practically meld into a single hybrid form as Hyde becomes Jekyll.

Dooly’s Hyde is one of the most complex characters in the play as he struggles with his love of Elizabeth (Helen Harvester) and his hatred for everyone else. His evil acts are big, bombastic and gleeful; he dances, prances and fairly sings as he commits murder, and the audience is kept in suspense whenever he is with Elizabeth as he fights with conflicting compulsions to love her or to kill her. Dooly’s stage presence as Hyde is overwhelming.

Frances totally submerges her own persona in the characters of eight very different people, from a prostitute to a student, to an old woman to an interpretation of Hyde that is like a prancing bantam rooster – all of these roles balanced by her steady role as the very formal and serious Poole.

Russ Holm in the dual role as Hyde No. 1 and Jekyll’s colleague Utterson is the Jack Nicholson of South Sound theater. Like Nicholson, he’s recognizable as a bigger-than-life character with a mischievous streak who never completely loses himself in his character but always makes his characters memorable.

Lawler displays a terrific range of acting skills in five roles including a self-aggrandizing Dr. Carew, a police inspector and yet another Hyde. He is most effective as Carew and as Hyde but believable in all of his roles.

Harvester pulls off one of the most demanding roles of all as Elizabeth, a poky charwoman with very little personality who believably falls in love with a monster.

This play is an acting and a directing tour de force.