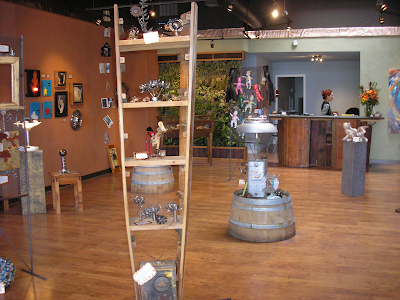 
An exciting new gallery opened in Olympia with an opening showing of 60 artists —most but not all from the South Sound area — “featuring artworks that incorporate recycled, reclaimed, and responsibly harvested materials,” according to a statement by gallery owner Jo Gallaugher.

The name is Matter. It’s on Fifth Avenue between Capital and Columbia.

I dropped by a week ago and was impressed with the overall look of the store. Excuse me, but I prefer to call it a store rather than a gallery because most of the items on display are furnishings, home decorating items, and various novelty items — utilitarian and decorative craft items rather than non-functional fine art. But there are some terrific fine art pieces there as well, including a piece called "Chair" and other sculptures by Devin Hlavinka, an artist from near Salem, Ore. "Chair" is a welded steel sculpture that takes the form of its namesake but can’t be sat upon, and not just because it lies on the floor. Excellent use of form and material.

Other fine art pieces of note include a couple of sculptures by Marsha Glaziere. Her "Salmon Boot" is a wire mesh boot that is also a salmon. Very cleverly done and attractive. Her "Peace by Piece" is an iconic visual pun. It is a peace symbol made from the working innards of pistols (do I need to say that piece is another word for a side arm?).

Bridging the gap between home décor and fine art is the "Living Wall" by Christian Iverson. This is a room divider made of living plant life, most of which appears to be moss and various ground covers such as one may expect to see in an old growth forest. This one is a functional wall created for the gallery. It is not for sale, but Gallaugher informs me that the artist will make living walls on commission.

As indicated earlier, more functional and decorative pieces dominate the store. There are lots of lamps and pillows and dolls and so forth, including some very cute animal dolls by Diane Kurzyna, aka Ruby Reusable, South Sound’s queen of recycled art — at least some of which are made with her trademark material, Wonder Bread wrappers.

Some of the most attractive pieces are functional metal pieces created from recycled metals by Pat Tassoni. One in particular that I like is called "Retro Copper Coatrack." It is a functional coat rack with a copper globe on top that looks like an old fashioned diving bell. Tassoni also has a couple of throw pillows displayed in an antique television cabinet. The cabinet serves as a display for the pillows, which are sold separately, but it works visually as a Dadaistic sculpture combining elements of Marcel Duchamp and Joseph Cornell.

Also very nice are a shelf and the store counter created by sculptor George Kurzman out of parts of an old boat.

Matter opened Sept. 24, but the evening of Friday, Nov. 6 is the grand opening. I hear they’re going to have food, champagne and live music by the K.N.O.T. Jazz Quartet.