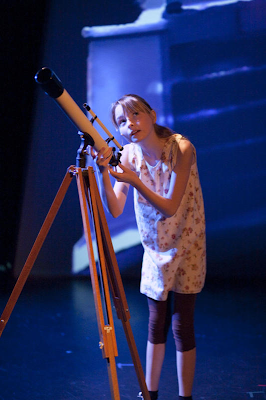 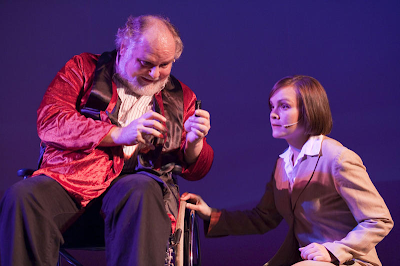 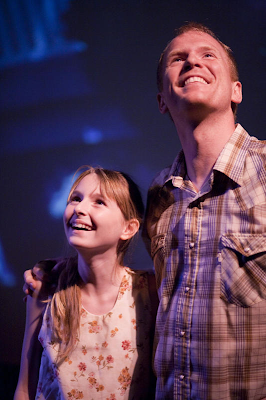 “Carl Sagan’s Contact” at Centerstage is the world premiere of an exciting new musical based on Sagan’s novel, with book by Centerstage artistic director Alan Bryce, music by Peter Sipos, and lyrics by Amy Engelhardt. It is directed by Bryce.

It is a rock opera in the tradition of “Hair” and “Rent.”

Originally scheduled for last May, the production was postponed while the theater company wrangled over management of Federal Way’s Knutzen Family Theatre. Serendipitously, rescheduling the premiere gave the company needed extra time to work out the kinks in a technically challenging production – and the winner is the audience.

A world premiere is always a work in progress. Lines of dialogue may be changed. Perhaps even whole songs or scenes will be cut or added, and technical problems will be fixed. But overall this production was wonderful as it was presented opening weekend – wonderful in the true sense of the word, full of wonder, for wonder is an underlying theme as Ellie Arroway (played as a young girl by Zoe McLane and as a woman by Caitlin Frances) carries her childhood fascination with the marvelous mysteries of the universe into an adult career searching for extraterrestrial life.

This sense of wonder and of hope is also conveyed with the emotionally expansiveness of Sipos’ music as musically directed by Mark Rabe.

Which brings me to a point that is true of all successful theatrical productions but especially evident here: A play is a collaborative work that depends on all of the pieces coming together, music, lyrics, acting, sets and lighting. The collaborative nature is pointed out in the program, where even stagehands who visibly move set pieces are given equal billing with the actors.

The set is an almost bare stage with a few desks, chairs and a big black box that are carried on and off stage by the Kuroko (Japanese-style stagehands) and a large video projection of star fields and Ellie’s childhood home and other imagery (set and lighting by Craig Wollam, video by Riley Dickens).

Frances is beautifully cast as Ellie. As an agnostic scientist who is forced to deal with frustrating government officials and an evangelical preacher who is sure it is God, not aliens, who have contacted her, we see her struggle to contain her anger, but as the woman whose starry-eyed little-girl self still lives inside her. She sings beautifully with a voice that is clear and strong.

Matt Posner is marvelous as the preacher Palmer Joss, who is not a cardboard, stereotypical evangelist, but a very complex and surprisingly likable protagonist, and Posner plays him with great expressive range. His singing and dancing, as South Sound audiences have come to expect, are outstanding. I was warned before the play opened that he had a sore throat and could not sing well. If this is Posner in bad voice, I can’t wait to hear him again when he’s in good voice.

His rocking gospel song “The Other Side of the Light” is a knockout, and his duet with Frances on “Not Written in the Stars” is the most beautiful song in the play. The sparks between these two are underplayed but electric nevertheless.

Most outstanding in supporting roles are Natalie Moe as Ellie’s mother and Eric Hartley as Hadden Suit, a lecherous old man who just happens to be the richest man in the world and a brilliantly eccentric scientist. The big musical production on “They Can’t Touch Me” with Hadden and three of the sexiest nurses ever seen on stage (Amber Cutlip, Sophia Federighi and Alison Monda) is delightfully funny and rocking. Which brings me to my one complaint about the music: it was too polished. I wish there had been more raw, hard-rocking songs like this one and “The Other Side …”

The title, and the song by the same name, “Contact,” refers not just to first contact with an alien, but with Ellie’s contact with her past, and to loving contact among human beings on earth – even nominal enemies such as Palmer.

This is a wonderfully uplifting musical.