‘Curtains’ story, cast could use a little oomph 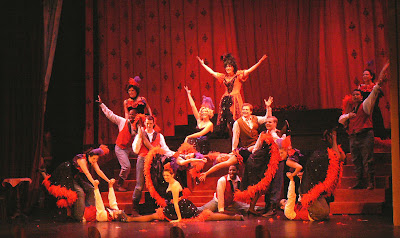 Published in The News Tribune Oct. 9, 2009
Photos by Kat Dollarhide

“Curtains” at Tacoma Musical Playhouse is a murder-mystery musical comedy that played to mixed reviews on Broadway as recently as 2007. It garnered major awards, but also was panned by a number of critics.

Written by Rupert Holmes (“The Mystery of Edwin Drood” and the TV series “Remember WENN”) with music and lyrics by the great songwriting team of John Kander and Fred Ebb, this play should be much better than it is.

The set-up is classic. A musical theater company is opening a show in Boston before taking it to Broadway. The star is a fading Hollywood diva with a big ego and little talent who is murdered on opening night. The police detective who comes to investigate the crime is a theater wannabe who falls in love with the understudy, a sweet ingénue.

Despite all his previous successes, Holmes has peopled this story with stereotypical characters and lame jokes that might have gone over well if delivered by Bob Hope in 1953 – running jokes by the show’s producer about her husband’s lack of sexual prowess and the detective repeatedly asking the ingénue out after telling her and the entire cast that they can’t leave the building.

How this story earned a Drama Desk Award for best book of a musical is beyond me.

The music is good, but there are no show-stoppers like Kander and Ebb’s great earlier hits “New York New York” and the title tune from “Cabaret.”

The cast is made up of excellent actors, but on the afternoon I saw it their performances were mostly lackluster.

Chris Serface, who was outstanding in “Beauty and the Beast” and “Ragtime,” came across as walking through his lines as Johnny the snide stage manager. He has little to do but at least does it with a funny sneer, helped by a cigarette prop.

Mark Rake-Marona as the detective, also a good actor and singer who has done some outstanding turns on the Tacoma Musical Playhouse stage, has no punch to his delivery in this play.

On the upside, Heather Malroy is convincing as Georgia Hendricks, the songwriter who steps up to replace the murdered star. Of indeterminate age, Hendricks was once a Broadway star but has not been on stage in years and is nervous. Malroy fits this role comfortably, and she has a strong and beautiful voice.

Also on the upside are the performances of Gregory Conn as the composer Aaron Fox, and TMP artistic director Jon Douglas Rake as Christopher Belling, the director of the play-within-a-play.

Conn has little to do acting-wise. His character is very restrained. But his singing is terrific. His voice is smooth, mellow, smoky – perfect for tender love ballads like “I Miss the Music,” in which he bemoans the loss of his songwriting partner, Georgia, and a reprise of sorts, “Thinking of Missing the Music,” a lovely duet with Malroy.

Rake’s Belling is one of the funniest characters in the play. He storms around with head held proudly high like Alfred Hitchcock in the opening of his old television show and speaks with a put-on slightly British accent.

The best comic song is a dirge called “The Woman’s Dead,” which (pun intended) is sung by the ensemble with deadpan seriousness. The best production number is a rousing song called “Thataway” that is belted out in the best Broadway tradition by Malroy with the entire cast, including a troop of can-can dancers.

The surprise hit song comes at the beginning of the second act when TMP musical director Jeff Stvrtecky playing conductor Sasha Iljinsky sings “The Man Is Dead” from the orchestra pit. This is followed by an inventive bit of play with flashlight Halloween effects by the ensemble on the song “He Did It” in which everyone accuses everyone else.

There are entertaining moments in this play, but the jokes made me feel like I was watching a lounge act in the 1950s, and I think most of the cast needs to put a little more oomph into their acting.