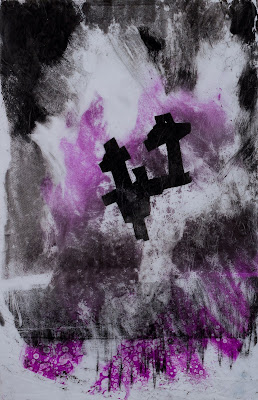 
Kathy Gore Fuss was an established artist long before going back to college to get her BFA in drawing and painting from the University of Washington. This after 30 years as a working artist and after the tragic loss of her husband in 2004. Already an inventive risk taker with her art, Gore Fuss emerged from UW a much more solid, mature and disciplined artist as seen in her current show at Art House Design.

I don’t know about the art program at UW, but I know most university art departments encourage students to work on variations on a theme. You may remember a famous series of paintings of a bull by Pablo Picasso (Google Picasso bull series) in which each of 11 lithographs was more abstract than the previous one. The works in this show are like that but with more series and fewer works in each (probably culled from a much larger body of work over the past three years).

A fairly large charcoal drawing called "Apertures" greets the visitor upon entering the gallery. It is an abstract drawing based on a series of openings like holes blasted in rock, each on a separate layer of paper with holes ripped out. The image is explosive. Like what we’d hoped to see with the bombing of the moon, which took place on the day I saw this show. Explosive and ragged, it is simultaneously as delicate as a lace doily. The charcoal drawing is nothing more than shading, but shading that is carefully designed to emphasize the successive layers.

Continuing the series, there is a paper sculpture hanging on the wall nearby that looks like a giant paper snowflake and next to that a small group of similar but much smaller drawings, and near the back of the gallery a series of small acrylic paintings that expand on the theme. I don’t know what they’re painted on, but it looks like stiff paper mounted on a board with two surfaces an inch apart with holes ripped and torn out of the top layer. They look like old tin sheets with faded enamel paint and rusted-out holes. The acrylic paint looks like encaustic, but it’s not. These works are as raw and ragged as "Apertures" is delicately lacy.

Another group that is very successful is "Crosses" I, II and III. Each print in this series has a cross or group of connected crosses that look like broken pieces of some kind of scaffolding in the center with random forms expanding toward the edges. There is a brightly colored area in the middle with the outer forms in tones of grey, and the crosses are black. In two of the prints the setting looks like a landscape or cityscape, and the one in the center looks like an explosion of a structure in space.

Another series called "Vessels" consists of five pictures of a tea pot (four monotype and one acrylic), some in color and some in black and white.

Throughout the show are similar series, each showing a rich array of variations on a theme with diverse media.

I suspect Gore Fuss’ latest works will not have the mass appeal her earlier work had. It’s less showy, less kitschy, less decorative, and a lot better.

Also showing is a substantial collection of gouache paintings by John Hannukaine.