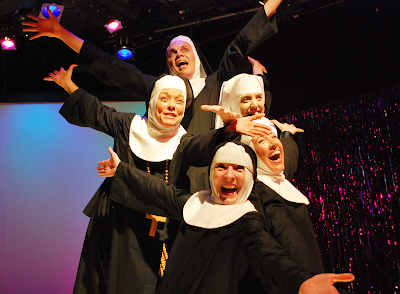 The News Tribune / The Olympian

I've seen “Nunsense” before but never like this. This performance is not only rolling-in-the-aisles funny and deliciously irreverent, it rocks.

Director, musical director and choreographer Troy Arnold Fisher says: “For us to swallow the campy dialogue, stock melodies and extremely corny story line, the five women performing on stage have to knock our socks off with their talent and energy.” They do. Absolutely.

These actors are all talented. They sing, they dance, they tell risqué jokes with a knowing wink, and they quickly go from anger to sweetness to unbridled silliness.

Even the most restrained of these actors – Brenda Amburgy in the guise of Sister Mary Regina, Mother Superior of the Little Sisters of Hoboken – shouts over Sister Mary Hubert, stepping all over her lines during their many arguments, but then quickly and hilariously turns to sweetness and light when she realizes there’s an audience watching. As does the imperious Sister Mary Hubert. Mostly the mother superior tries (unsuccessfully) to maintain her dignity, but loses it completely when she reverts to her former life as a circus performer.

Carolyn Willems Van Dijk is appropriately loud and silly as Sister Mary Leo, and she shines when displaying her special talent as a ballerina.

Also loud (holding high notes incredibly long times) is Heidi Fredericks as the brash and streetwise kid from Brooklyn, Sister Robert Anne. Fredericks plays her with a rubbery face and outlandish physicality. Plus she displays a considerable talent for impersonating a host of pop stars while twisting her habit into a whole catalogue of props.

A surprise guest actor who is listed in the program as Georgina Spelvin plays Sister Mary Hubert the domineering Mistress of Novices. She has a majestic stage presence and convincingly conveys sarcasm, sweetness, anger and arrogance. And she belts out a rocking gospel tune, “Holier Than Thou,” that brings the audience to its feet rocking and clapping and blinded with tears of laughter. (If a video of this song were posted online there would be a million hits overnight).

And finally, a comic star of grandiose proportions emerges in the person of Stephanie C. Nace in the enviable role of Sister Mary Amnesia. Small, wiry and energetic with a jaw that drops so low it seems to come unhinged, she’s like a combination Imogene Coco, Carol Burnett and Dolly Parton, with facial contortions to rival those of Jerry Lewis in his prime. Plus she sings wonderfully. Her great big country and western song “I Could’ve Gone to Nashville” is a real foot-stomper.

By now most people should be familiar with this show and its various spinoffs. It is not so much musical theater as it is a Vaudeville show with song and dance wrapped inside an endless stream of puns and double entendres, all of which poke lighthearted fun at the Catholic Church. The absurd story line revolves around dead sisters in the convent freezer, and the entire play is presented as a fundraiser to get money to bury them.

Warning: There is a lot of audience participation in this show. No matter where in the theater you sit you are liable to be personally engaged by a crazy nun. You might even be asked for a kiss. And before the play is over I can guarantee you’ll be clapping and stomping your feet in time to rocking gospel music.

By the way, since the cat is long since out of the bag I can reveal that the surprise guest celebrity actor is Jeff Kingsbury in drag again and funnier than ever.