Reunion at the Wetside 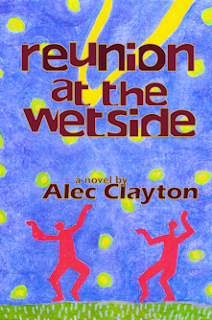 I just ordered 50 copies of my latest novel, Reunion at the Wetside. The shipment is due to arrive sometime between now and Nov. 10. I will sell autographed copies for $15. The book will also be available within a few days from amazon.com at the same price plus shipping.

Jim Bright was the last person in the world Alex expected to see sashaying up to the bar in Barney’s Pub, the most notorious gay bar in Wetside, Washington. Jim had been Mister Everything in high school almost fifty years ago—all-conference quarterback for the Jefferson High School Golden Wave, track star (holder of the state record in the mile. 4:28), class president (unopposed), voted most handsome and most likely to succeed (both in and out of bed was the popular quip at the time).

... or same thing as told by Alex in the blog she and Jim wrote together:

I purt-nigh pissed in my panties when I saw Jim Bright. Purt-nigh squirted beer out my nose to boot. Wouldn’t that have been a fine kettle of fish? Maybe he’d of run over and done a Heimlich on me.

The description on the back cover reads:

Romance blossoms at Barney's Pub between Alex, a leftwing Democrat, and Jim, a Libertarian-leaning Republican - old friends from half a century ago.

Meantime, someone is killing off all the old drag queens, and Jim may be the only person who can catch the killer

... if he doesn't become the next victim.

And there's a cover blurb from no less a writer than Pulitzer Prize-nominated author Jack Butler, author of West of Hollywood, Hawk Gumbo and Other Stories, The Kid Who Wanted to Be a Spaceman, Jujitsu for Christ, Nightshade, Living in Little Rock With Miss Little Rock (the Pulitzer nominee), Jack’s Skillet: Plain Talk and Some Recipes From a Guy in the Kitchen (a cookbook), Dreamers, and soon to be released from ClaytonWorks Publishing Practicing Zen Without a License:

"If you like murder mysteries with a bit of meat and history on them, you will love Reunion at the Wetside.  Alec Clayton lovingly and skillfully unveils the layered secrets behind of a series of murders, which turn out, not surprisingly, to have their roots in what happened among a group of children (and the young adults they became) decades ago.  Once again, the past not only isn't gone, it isn't even the past.  And this past is a killer!" - Jack Butler


The one other thing none of the promos or cover blurbs say is that the book is funny as hell.
Posted by Alec Clayton at 2:40 PM