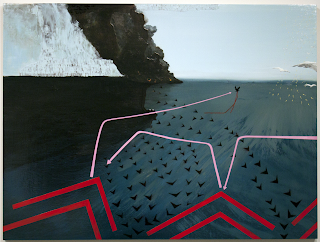 Art about home at The Evergreen State College

Haunting music permeates the space of the gallery at The Evergreen State College during the exhibition It's Complicated - Art About Home. The music comes from Jason Lujan's video "From One Dream to Another," which is eerily beautiful and mysterious, and which sets the mood and theme of the show.

The artists are all Native Americans, and the theme is "about home," which in their various interpretations is the larger world in which we live. Growing up Indian in 20th century America, these artists have been shaped by a blend of Native and contemporary American cultures, and that shows clearly in these works. The art is about the relationship between urban and natural environments, about their place in this world and reverence for animals and nature. Some of the imagery is borrowed from traditional Native art, but the techniques and methods come from contemporary American art - from Warhol and Rauschenberg to modern computer and video art.

In Lujan's video a flock of bright red birds ascend in a dark forest. Cut to a mysterious cloaked figure in the same brilliant red. Cut to yet another scene in which we see that the cloaked figure is a woman and to a final scene in which she walks down a city street and fades and vanishes, ghost-like. It is beautiful and haunting.

Similar imagery appears in Maria Hupfield's sculpture, "Flap, Flap, Flap." Inside a circle of red tape on the floor we see a group of dying birds in stark white plaster and papier-mâché. The birds are caught in still motion, desperately flapping their wings, trying to escape the concrete nest in which they are dying in agony. The implications are clear and the emotion is powerfully expressed.

Merritt Johnson is showing two large oil paintings of blue skies and white clouds combined with other landscape elements and various symbols. The most striking of these is one that hangs above a sculpture of a turkey made with various materials, including actual turkey feathers. Not so dramatic but equally powerful is a smaller Johnson painting called "Crow becoming the one big water, gulls flying away."

Nicholas Galanin is showing a large wall hanging that rounds a corner of the gallery and, intriguingly, has wall labels indicating different media as if this continuous work is two works. It is (or they are) called "The Imaginary Indian." In one the media is listed as paddle, wood, acrylic and wallpaper; the other is "non-Native art," wood, acrylic and wallpaper. There is a lot of tricky trompe l'oeil in this one.

Sara Sense is showing three large digital photographs. All employ the technique of cutting photos into strips and weaving them together, and all feature a combination of urban and natural landscapes with models who look like fashion models.

Most ambitious is a two-channel video by Kade Twist combining 10 YouTube videos compiled by different people.