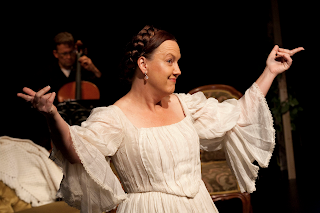 When Maria Glanz’s Emily Dickinson welcomes the Centerstage audience into her Amherst, Mass., home, there is a deep feeling of welcome in this most intimate of plays, “The Belle of Amherst,” co-produced by Centerstage and Seattle’s Sound Theatre Co.

“The Belle of Amherst” is a one-woman play with only one person other than Glanz on the stage: cellist Brad Hawkins performing the music he wrote for this production.

Dressed all in white, as she always was, Dickinson steps into her living room (a stunning set by Craig Wollam, co-founder of Seattle Scenic Studios) and offers her guests (the audience) a taste of her black cake. She proudly shares the recipe – which, with 8 pounds of raisins and currents, sounds like it could make enough to feed an army. Then she begins to act out the stories of her life.

Fifty years old and not yet recognized as a great poet, she lives an almost reclusive life. At this point, she has published only a handful of poems, and those anonymously; she finds it difficult to connect with other people. For example, she befriends an editor of the Atlantic Monthly via mail, sends him her poems, and carries on an eight-year correspondence – only to have him brutally reject her writing and her, when they finally meet.

Her life is filled with disappointment and unrequited love, and yet she remains almost always upbeat, hopeful and witty. Seamlessly gliding between Dickinson as narrator and acting out scenes from the poet’s life, Glanz conveys all of this with such skill and so naturally that you feel she is, indeed, Emily Dickinson and you are a much-loved guest in her home.

Hawkins’ cello complements the story in all its parts, setting the mood and in places sounding like another actor conversing with Glanz. Only in brief moments did the cello overpower the actor’s voice.

Glanz has won international acclaim as a solo performer, including such awards as “Best of Fest” in Edmonton and Winnipeg Fringe festivals and “Artistic Pick” in the 1999 and 2001 Seattle Fringe Festivals. Her performance in this play shows why she has won such awards.

The play written by William Luce provides entertaining insights into Dickinson’s life and makes extensive use of her poetry. Not only does she read many of her poems during the course of the play, but she drops lines from them into her conversation in a very natural manner.

This play is dramatic, romantic and sad; but most of all witty.

Wollam’s set is as warm and welcoming as the character in the play. Doors, windows, a short staircase and furniture stand on a midnight blue floor and hang in front of a midnight blue backdrop, creating the feeling that they are floating in air. It is not only beautiful, it is simultaneously otherworldly and homey. ‘The Belle of Amherst’