'Into the Woods' at Capital Playhouse: Enter a dark fairy tale 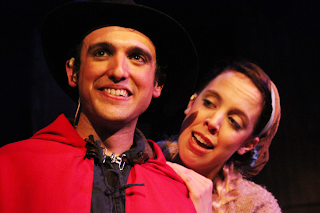 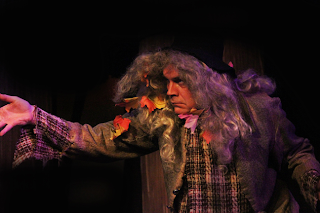 PHOTOS BY DENNIS KURTZ/CAPITAL PLAYHOUSE
Daniel Boman is the Baker and Carolyn Willems Van Dijk is the Baker’s Wife, and Jeff Kingsbury is the Mysterious Man in Capital Playhouse’s “Into the Woods.”

Sitting through Stephen Sondheim and James Lapine’s “Into the Woods” at Capital Playhouse was not easy.

The staging and the acting were up to Capital Playhouse’s usual high standards, but the book and music are difficult – a strong concept with innovative and perceptive humor and insights, but Sondheim and Lapine put too much in and the play is too long.

Frank Rich nailed it in his New York Times review of the original Broadway production: “Unfortunately, the book is as wildly overgrown as the forest. ... Perhaps the enterprise could use less art and more craft.”

Like Sondheim’s “Sweeney Todd,” it probes the darker regions of the human heart through a retelling of popular fairy tales, but it plods along with only hints of the biting humor and suspense that made “Sweeney Todd” so engrossing.

A poor baker and his wife (Daniel Boman and Carolyn Willems Van Dijk) want to have a baby, but their neighbor the witch (Deanna Moon) cast a spell on them, making them sterile, and told them the only way to break the spell would be to go into the woods and bring back certain items, which they easily find but then must buy or steal from their owners: Little Red Riding Hood (Alayna Deatherage), Jack of “Jack and the Beanstalk” (Ryan Tunheim), Cinderella (Bailey Boyd) and Rapunzel (Eva Gheorghiu).

In addition to these characters, the story is cluttered with a whole who’s who of fairy-tale characters from Sleeping Beauty (Alessa Daniel), Snow White (Toni Bridges) and Cinderella’s father (Gregory Conn, whose talents are wasted in this superfluous role) and a couple of princes (Stephen Anastasia and Matthew Helton, the latter of whom doubles wonderfully as the big bad wolf).

The cast is a mixture of seasoned regulars at Capital Playhouse and a lot of young actors recently out of the Kids at Play summer children’s workshop. Boman, a transplant from Illinois, makes his Capital Playhouse debut in this production, but first made his mark there as resident choreographer for Kids at Play. He is a charming Baker. Van Dijk is a veteran of many Capital Playhouse shows and also served as choreographer for this summer’s kids’ program. She’s a strong performer as the Baker’s wife. Another veteran actor who turns in a strong performance is Moon as the witch. In Act 1, she is a stereotypical witch with all the usual screeches and cackles, but in Act 2, she is transformed into a normal woman with a hauntingly beautiful voice soloing on “Witch’s Lament.”

Outstanding physical comedy is turned in by the princes (Helton and Anastasia), who spoof hammy actors throughout. Helton also displays great range of expression and voice when he doubles as the wolf. His outlandish manner of musically taunting Little Red Riding Hood with the song “Hello, Little Girl” is a musical and comedic highlight.

Finally, Playhouse artistic director Jeff Kingsbury is very much his well-known self as the narrator. His gestures and expressions work precisely because they are so familiar, and then he comically morphs into an almost unrecognizable mystery man with skeletal-like movements, and proves that he’s in strong voice after an extensive history of being in more than 150 musicals.

Despite being long and tiring, the fantasy and humor is fun and it is nice to see so many young actors perform with such confidence alongside the veterans.