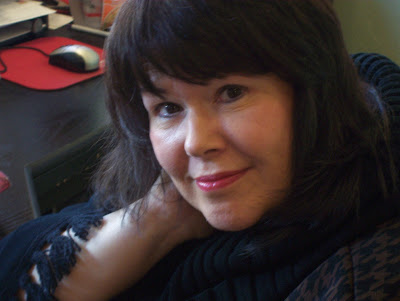 Published in the Weekly Volcano, May 20, 2010
Pictured: Paula Tutmarc-Johnson

Another one bites the dust. After four years (six if you count a previous incarnation), Paula Tutmarc-Johnson’s Two Vaults Gallery will close its doors forever when their current show ends.

“Our location just two doors from The Grand Cinema has proved to bring us a continued flow of art-minded folks. These folks and all those who have found us through the four years we have been here have become regulars and supporters of the gallery, and I have to say here that they still are,” Johnson says.

She says the reason they are closing is “simply the economy. People have continued to come to our shows and voice there appreciation for the gallery and the art in it, but at the same time have been losing jobs, or fear of losing a job, or have had hours cut back drastically, and/or seen 401 Ks disappear, along with health insurance, and thus the disposable income becomes part of the necessary.”

Local artists Lynn DiNino and Valerie Vance have organized a tribute to Johnson in the form of a book of messages to her and artwork from other area artists that will be presented to her at tonight’s Art Walk.

In an email sent to Tacoma area artists DiNino said, “This closing of the gallery and losing Paula as 'our Matron of the Arts' is an extremely huge loss for all of us and for the City of Tacoma.”

Two Vaults is not going quietly into the night; they are going out with a bang — a final show featuring encaustic and three dimensional artist Carla Dimitriou, who also happens to be — with her husband John — the owner of Jazz Alley in Seattle.

This collection was inspired by her time in New Orleans soon after Katrina, when she was there participating in the rescue of pets abandoned during the hurricane.

“We have had a great time here, and would clearly have chosen to stay if the economy were in a different place,” Johnson says. I have loved every minute of being here. Sixth and Fawcett, Minoela, Corina Bakery and especially the marvelous people at the Grand have created a special spot in Tacoma, and it has been a real pleasure and honor to be part of it.”

Dimitriou’s encaustic paintings are a cross between Pop Art, Early American decorative arts and esoteric and mythological images that relate to a lot of Native art or even Egyptian scrolls — not to mention Jasper Johns. Her imagery is rich and evocative, and the surface quality of her paintings, like that of most encaustic work, is lush.

Ironically, this is among the best work I’ve seen at Two Vaults. I’ve heard of saving the best for last, but this is going too far.

Many businesses have gone under due to the recession. The arts are especially hard hit. It seems like just yesterday that Grand Impromptu Gallery two doors from Two Vaults closed their doors. It’s a sad time, but tonight’s Art Walk opening should be a joyful occasion.