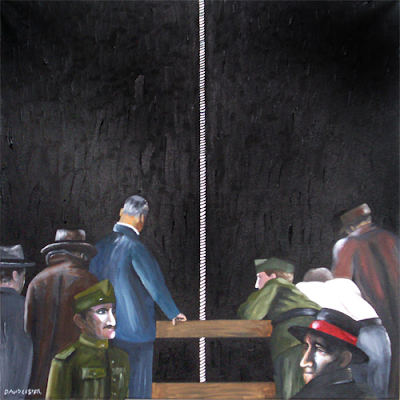 Political artists from Vancouver at Northern

Pictured: THE LYNCHING OF WESLEY EVEREST: An acrylic painting by David Lester

Guitarist David Lester and singer Jean Smith are the underground musical duo Mecca Normal. They are also visual artists, and they have curated and are featured in a month-long exhibition at the all-ages club Northern in Olympia. The show is called The Black Dot Museum: Political Artists from Vancouver, and though I have yet to see the exhibit (something came up this weekend, and I didn't want to put this column off a week) - it seems pretty awesome.

In addition to Lester and Smith, the show features works from Gord Hill and Brian Roche. The Black Dot Museum functions online with touring exhibits focused on political art and music.

Lester authored the graphic novel The Listener, and he is a painter of historical subjects specializing in picturing events and people most historians (except for the great Howard Zinn) ignore. I watched a video of Lester talking about his painting "The Lynching of Wesley Everest," which depicts the 1919 lynching of an Industrial Workers of the World union member in Centralia. Everest was dragged from his cell and lynched on the bridge over the Chehalis River. No one was charged with the murder. In the video Lester talks about why he chose not to show the hanging but rather to picture the murderers looking over the edge of a bridge to survey their handiwork after they lynched Everest. We see the rope, not the body, and we get a peek into the souls of the murders.

Lester said his work has more to do with subject matter than style, but I see in this a style very much like that of the American Scene painters of the 1930s and '40s, particularly Walt Kuhn.

Smith is a novelist, lyricist, singer and painter. Her series of self-portraits from age 13 has been included in several Ladyfest art exhibits. I was intrigued with her painting "Discovering Utopia #3," a fantasy vision of floating cones or hills in the sky with, on the ground beneath and stretching as if to reach Utopia, the crippled Christina from the famous Andrew Wyeth painting "Christina's World." On the Black Dot Museum Facebook page she says she was surprised to discover that Wyeth's painting was much "looser" when seen in the original than it appears in reproduction. Likewise, Smith's paintings may appear much different in person than on a computer screen, which is why you should see this show and not just settle for seeing the images online.

Gord, a writer, political activist, and co-director of the American Indian Movement of Colorado, is the author and illustrator of The 500 Years of Resistance Comic Book, a graphic portrayal of Indigenous resistance to the European colonization of the Americas.

Roche is a painter of a kind of odd genre of Pop Art combining historical figures with cartoon images and other icons of popular culture such as (seen in a number of his paintings) sections from Picasso's "Guernica." Stylistically he reminds me a lot of David Salle, who I used to hate but have come to appreciate. I perused a gallery of Roche's paintings and was intrigued enough to want to see more, meaning I definitely intend to get down to Northern and see this show, and I think you should too.

[Northern, The Black Dot Museum: Political Artists from Vancouver, through May 28, most Fridays, Saturdays & Sundays, 2-4 p.m. or by appointment, 321 Fourth Ave., Olympia, northernolympia.org]
Posted by Alec Clayton at 7:23 AM