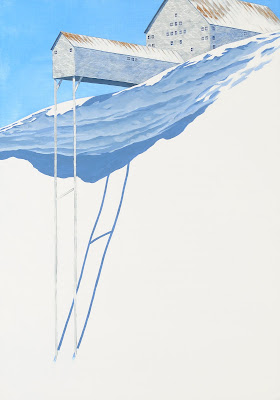 Published in the Weekly Volcano, May 27, 2010
Pictured: "Life on the Cornice" by Jerey Mangan

Would you like to see why Jeremy Mangan won the 2009 Foundation of Art Award from The Greater Tacoma Community Foundation? A peek at his show at Fulcrum Gallery might provide a good clue.

Mangan’s paintings are inventive, thought provoking, humorous, technically marvelous and beautifully composed. What more can you ask of a painting? A painting can’t feed the hungry of stop war or heal a broken heart, but it can remind us that the world we live in is not all humdrum and ugly. That’s what Mangan’s paintings do.

Technical skill in painting has never been at the top of my list of criteria for judging art, but it doesn’t hurt. Mangan’s photo-surrealist paintings look like photographs. The only clue that these are paintings and not photographs is that the subjects do not exist in the real world and that brushstrokes can be seen only in the long, thin shadows of the stilt-like poles upon which the houses rest in a few of his paintings and in the fast-moving clouds in a single painting called "Collapsed Shed." In this painting an old farm shed isolated in a brown field has fallen in on itself. There is a rusted tin roof and spread out from it on the ground like pick-up sticks are the multicolored boards that formerly made up the side walls of the shed. The sky overhead is clear and blue with a few fleecy clouds and what looks like big brushstrokes with a clear gel across the clouds, which creates the impression of fast movement. This is a marvelous little painting that in its simplicity lifts the viewer out of the ordinary and transports him to a magical world that looks like the world we live in but is one step removed.

The shed and the multicolored boards are Mangan trademarks. One or the other, or both, show up in all of his paintings. “Strongly influenced by building practices of the early American West… my current work focuses on barn or shed-like constructions, often elevated and supported by stilts,” Mangan writes in a gallery statement. “I hope these images allude to the strength, usefulness, and beauty, but also the hubris, precariousness, and ridiculousness, of human ambition.”

All of his buildings look like they’re very old and made of wood. Some have old grey wood slats and the others have slats of red, yellow, blue, green and white.

"Mt. St. Helens" pictures a panoramic view of the mountain with its collapsed dome covered with a construction of pyramid-shaped wooden structure with the many-colored planks. Mangan writes on the label, “Clearly Mt. St. Helens needed a cap, and clearly it needed to be colorful.”

"Trojan Horse" is a wall-size picture of the famous wooden horse on wheels, but the horse's body is made of old farm buildings with grey wood and little windows. His tail is made of many colored ribbons.

"General Sense of Well Being" is magical, mystical and restful.

"Life on the Cornice" stands out as different from all the others because of its use of radical balance and vast expanses of white as the house is perched in the upper right corner of the painting, high on the edge of a cliff that drops into nothing. These are terrific little paintings and more impactful than the more bombastic horse and mountain.

Another thing I like about Mangan, which is indicated in his artist statement, is his awareness of the tension “inherent in the illusion of three-dimensional space on a two dimensional plane.” Not enough artists are aware of this.

Gallery owner Oliver Doriss says Mangan is going places, and this may be our last chance to see his work in Tacoma. (Although I suspect some of his paintings may show up in future shows at Tacoma Art Museum.)