‘Drum Song' tapers off after a strong start 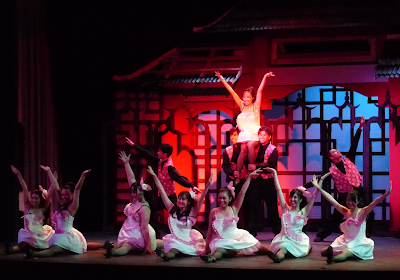 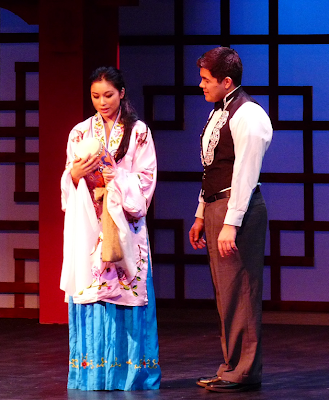 I enjoyed Rodgers and Hammerstein’s “Flower Drum Song” at Tacoma Musical Playhouse. It’s not a great performance but it has great moments.

The opening musical number, “A Hundred Million Miracles,” sung by April Villanueva with highly stylized backup singing and dancing by the ensemble cast, is breathtaking. It is done with a simple and dramatic set, lighting and abstract imagery.

Jeffrey Stvrtecky’s large orchestra sounds more full than I’ve ever heard them. If the entire play was as good as this opening number it would be marvelous beyond description. But it’s not. It gets silly and predictable, but it is still highly entertaining.

“Flower Drum Song” has proven to be one of Rodgers and Hammerstein’s more controversial musicals. It opened to great success in 1958 but soon fell out of favor because of stereotypical racist depictions of the Chinese characters.

The book was rewritten by David Henry Hwang (author of the Pulitzer Prize-nominated drama “The Dance and the Railroad” and the popular musical “Madame Butterfly”) for a 2002 revival that played to mixed reviews. Hwang restored some of the darker elements from the original novel that had been taken out, updated it to get rid of the outdated racial stereotypes and threw in a lot of topical humor.

This musical is seldom produced because it calls for a large orchestra playing difficult music and an all-Asian cast. We’re fortunate that TMP was able to answer both challenges.

Villanueva stars as the beautiful Wu Mei-Li, a new immigrant from China who struggles to fit into the Chinese-American society in San Francisco’s Chinatown. TMP audiences are familiar with Villanueva, whose clear voice stood out in “Footloose,” “Miss Saigon” and “South Pacific.” She is at her best in this production. Joining her on stage are her father, Robert Villanueva, as Uncle Chin in his very first show, and her sister Alexa (ensemble) in her first main-stage production at TMP (she starred as Eponine in the TMP Camp Youth production of “Les Misérables”). Robert Villanueva is outstanding both as an actor and a singer, and I hope to see more of him.

The other leading lady is Karina Choe as the vivacious stripper Linda Low. She has a powerful voice and is a great dancer. The “striptease” is highly stylized and done in good taste, but is rather bland. There is nothing licentious about it.

John Olson III as the romantic lead Wang Ta holds his own on stage with these two dynamic leading ladies who dominate every scene they’re in. Olson’s stage presence is strong, and he is convincing as the son torn between love and shame for his father, between respect for tradition and infatuation with the new American way, not to mention his love for both Mei-Li and Linda Low. My only disappointment is that his voice sounds strained on some of the songs.

Comic relief is provided by Jessilyn Dumapias Carver as Madame Rita Liang and James Fesalbon as Harvard. Carver struts with loads of attitude, and is thoroughly delightful. Not so Fesalbon, who plays Harvard as an overdone fey stereotype.

The sets by Jon Douglas Rake, who also directs and choreographs this production, are beautiful. So is the lighting by John Chenault and the costumes by Joan Schlegel. Many of the costumes are authentic Chinese articles and others are a colorful combination of traditional Chinese and 1950s American.

Rake comments in the program that the choreography was challenging because it combines authentic Chinese opera movement with 1960s-style jazz steps. I found the choreography to be one of the more enjoyable aspects of this show.

Where: Tacoma Musical Playhouse at The Narrows Theatre, 7116 Sixth Ave.

I'm basing this solely on last names of the cast, but...so after all that griping at Joann Varnell, it turns out most of these actors aren't actually Asian-American. Is that correct?

Carv, I too noticed that a lot of the last names don't sound Asian, but that doesn't necessarily mean they aren't. The theater says they are.

Yes, I am Asian...I just married a White Dude*LOL*....and yes they are all Asian.
And the ones with the non Asian sounding names married white dudes also*LOL* And if they sound Spanish to you, it's because they are Filipino. I suggest maybe you come see the show Carv...my last show is Friday May 7th. My understudy will take my place the last three.
BTW..thanks again for the review Alec.
Glad you are feeling better.

Darn, Jessilyn, why'd ya'll marry all those white dudes. BTW, you were outstanding, and thanks for inquiring about my health.I'm doing OK. I'd better be, I have to attend three plays this weekend.

Cheerfully retracted. Unfortunately, I've been booked with Oly shows every night Flower Drum Song was staged, and I will be again on the seventh.

Alec Clayton wrote, "Hwang restored some of the darker elements from the original novel that had been taken out, updated it to get rid of the outdated racial stereotypes and threw in a lot of topical humor."