"Noises Off" is loud and perfectly timed 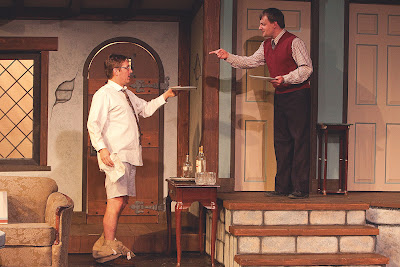 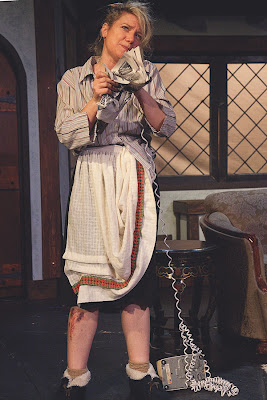 ‘Noises Off’ hilariously delves into the world of the theater

Tacoma Little Theatre’s production of “Noises Off” is loud. Even for theater. Even for a fast-paced farce. I spent the first 10 minutes of the Easter Sunday matinee wishing everybody would quit shouting. But then my ears adjusted to the noise level, and after that the loudest thing was the sound of laughter from the audience and the strange and inspired silence in the second act.

“Noises Off” is theater about theater. The stage is a stage, and the actors are actors. Act one is the final dress rehearsal for a play called “Nothing On.” It’s disastrous. Act two is opening night, even more disastrous. And act three is the most disastrous performance of all.

Each actor plays an actor playing a character in the play except for Lloyd, the director (Corey Moore) and Poppy, the stage manager (Hannah Andrews). The play begins with the opening scene of “Nothing On.” The housekeeper, Mrs. Clackett played by Dotty (Brynne Garman) enters the Brents’ living room carrying a plate of sardines and answers the telephone. She forgets her lines, picks up the wrong props, puts things in the wrong place, and then the director comes out of the audience to shout at her, and for the next two hours the stage is pure bedlam as actors playing actors drop lines and misplace props, miss cues, argue with each other and with the director, stage manager, and stage hand (Brenan Grant) as all go in and out of doors and windows that seldom operate properly.

Plus the ever-present sardines are dropped, moved, sat upon and stuffed down blouses. Amidst all of this bedlam backstage romances and jealousies play out, one alcoholic veteran actor, Selsdon, played by Elliot Weiner keeps making his entrance at the wrong time, and the sexy blonde played by Jenifer Rifenbery keeps running around in her underwear.

Written by Michael Frayn in 1982 and rewritten and updated in 2000, “Noises Off” is a modern farce based on two of the oldest comic bits in the business: people going in and out of multiple doors and windows but miraculously never running into each other, and a really bad acting company butchering a play. It is also a wonderful peek into the usually hidden world of the theater behind the stage.

With inspired writing and stagecraft, the entire set is turned around between the first and second acts, and act two takes place behind the stage with the “Noises Off” actors mostly miming their parts as the audience sees and hears bits and pieces of “Nothing On” being performed on stage, only a small portion of which can be glimpsed through a window.

Director Marty MacKenzie has done a very good job of choreographing complex movement, with as many as eight or nine actors on stage at once and all moving quickly and endlessly in and out of doors and windows and in and out of costumes. The scene where they snatch a whiskey bottle, an ax and a cactus out of one another’s grasp is worthy of a comparison to the Marx Brothers at their zaniest.

Thanks to the collaborative work the director, the technical director (Matt Osier), stage manager (Kate Holland) and the entire cast and crew, cast members manage to hit their marks throughout without dropping or breaking anything except those things that were intended to be dropped and broken.

Faced with complicated movement that depends on precise timing, it is no wonder that some of the characters displayed little nuance in their personalities. Opening the right door (or more accurately the wrong door) on cue was challenge enough. Actors who managed to enliven their characters were Garman as Dottie/Mrs. Clackett, Grant as Tim the stage hand and stand-in, Andrews as Poppy the stage manager, and Stephanie C. Nace as Belinda/Flavia.