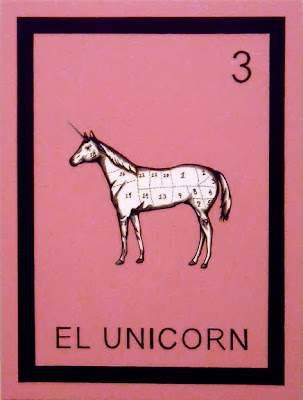 Ed Matlock's new paintings at Fulcrum are from a series based on the Mexican game Loteria.

Fulcrum Gallery continues to mount shows that make old codgers like me realize how out of touch they are. Ed Matlock's new paintings at Fulcrum are from a series based on the Mexican game Loteria, sometimes referred to as Mexican bingo. I never heard of it. And I'm only vaguely familiar with many of the images Matlock has put on his game cards, nearly all of which have been altered or reinterpreted. Gallery owner Oliver Doriss calls the show "generationally iconic," by which he means all of the images are familiar icons to people in their 30s and 40s "reduced to abstraction devoid of contextual information." That leaves me out.

The paintings are pop-style images of the cards painted flat with bold black outlines on brightly colored background. Like the cards from which they are taken, each has a name in Spanish and a number. But the names and the images don't correspond to the actual cards. El Banacho (The Gentleman), for instance, has the image of the drunk from the cards and Las Manos (The Hands) pictures two hands with fingers intertwined in a manner associated with Ninjas - people of the targeted age group supposedly recognize that immediately, just as they would immediately recognize the toy ray gun in Los Pistola.

I was told that El Chispero means the one who sparks. The card with that name pictures a spark plug. El Corazon (The Heart) pictures a mechanical heart and El Mano Rojo (The Red Hand) pictures the familiar monkey from the Barrel of Monkeys game.

Not all Loteria albums are the same. I found one on the Internet called "Queer Loteria" that has a card called El Afterhours that pictures the same drunk as seen here in El Banacho.

The only one that is a recreation of one of the 54 Loteria cards without change is El Diablo (The Devil), and I wish it had been changed. The raw red is too common looking, and so is the clichéd image of the devil. By comparison, most of the others have natural coloring on the images (some, such as El Corazon and El Chispero, in gray tones and others in natural or local colors, meaning the colors they would be in nature) set off in stark contrast with very unique colors in the backgrounds such as a brilliant pea green and a peach orange.

The images are impactful in their simplicity. The painting is precise, and the color choices are good.