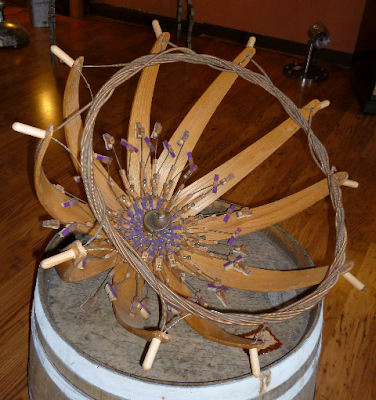 
Sculpture by Bret Lyon along with functional furniture and other works by Sam Winters are among the latest additions to Matter in downtown Olympia.

Marcel Duchamp and Allan Kaprow erased the boundaries between art and life. Andy Warhol destroyed the boundaries between fine and commercial art. Matter in Olympia has wiped out the distinctions between art and crafts, functional and non-functional art, galleries and boutiques. Matter features works by some 85 artists - 22 from Olympia - who make objects both aesthetic and functional out of materials that have previously been used for other purposes. In other words, recycled materials.

Art from recycled materials is all the rage now, and that's a good thing for the environment, but it's not a new thing. It started with Picasso and Braque before anyone ever heard of recycling. Matter owner Jo Gallaugher understands that it takes more than choice of materials to make good art, and she chooses artists with an eye toward quality, whether the work be jewelry, furniture, sculpture or some other art form.

Lyon is an abstract sculptor from Tacoma who works with found and scavenged materials. For his latest work he has taken apart the inner workings of an turn-of-the-century piano. The showpiece in Matter is his untitled work created with cables and felt damper blocks from the piano and bent wood taken from, I was told, discarded pieces from another artist's work. The parts are connected in a circular configuration that can be interpreted as an octopus or a sea anemone or the open petals of a flower. It is quite beautiful and also intriguing in concept as it depicts delicate organic forms in hard materials.

Also by Lyon is a wall-hanging sculpture made from the felt blocks and more pieces from the piano. It is called Exercise No. 2, and it reminds me a lot of a totem pole or some kind of ceremonial staff. While not as striking as the untitled work, it is quite attractive. A similar fetishistic work is Surrounds, bronze, steel, and plaster, which has mask-like faces embedded in a solid oblong form surrounded by a coil spring.

Lyon's The Space Between is a circular form made of many small scraps of wood to form what looks something like a two-person swing sitting on the floor or an off-kilter yin-yang sign. The contrast of the smooth shape and the rough texture of the wood pieces is very nice.

Winter's chair and bench made from welded scrap metal pieces that he calls tubes (they look more like gold bars to me) are very attractive minimalist sculptures. I didn't have the nerve to sit on one of them, if that is even allowed, so I can't attest to how comfortable they are as functional furniture, but they're great to look at.

Another piece of minimalist sculpture is a small piece by Jude Manley called Substitute for a Missing Ingredient. This is a piece of bow-shaped found wood with two long black splits into which are laid small stalks of some kind of plant. It looks like turned wood but may very well be found art. I didn't ask for details.

Another piece I like is Tim Mulligan's Flag IV. Strictly speaking it is an assemblage of painted wood scraps - differently colored planks laid out in a vertical stripe pattern. Conceptually it is an abstract painting.

These are but a few of many new pieces in this constantly changing and expanding gallery.