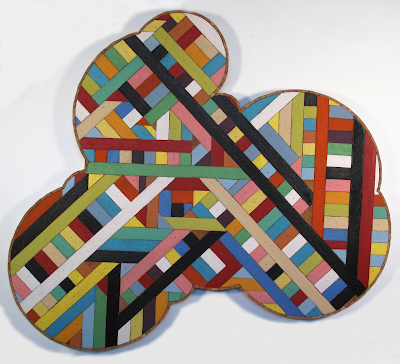 Up and coming South Sound artists

Here’s a list of South Sound visual artists to watch for in the coming months and years. Some have already made quite a splash on the scene, others are just beginning to emerge, and I can almost guarantee their success will grow. So file these names in memory, and when you hear that one of them is showing in an area gallery, check them out.

1. Jeremy Mangan - winner of the 2009 Foundation of Art Award Winner. What more need be said? He was also my pick as best artist in the Weekly Volcano’s “Best of Tacoma 2009.” At that time I described his paintings as surrealistic with a “brittle quality.” He even does ice sculpture. Can you beat that? See Mangan’s art at www.jeremymangan.com.

2. Holly Senn - installation artist and used book sculpture. I’ve watched Senn’s art expand and mature in bursts of creative energy over the past few years. Working mostly with old books scavenged from libraries, Senn creates sculptures that comment on history and the environment and which often reflect back on themselves. Her work is intelligent, environmentally conscious and well crafted. Learn more at www.ryksenn.com.

3. Sean Alexander - graphic artist. Tacomans know Alexander as the co-founder of the Helm, which for a short time was a showcase for emerging young artists and the happening place in downtown Tacoma. His drawings are edgy, biting and sensitive with a great touch for balancing objects spatially. Lately he’s had shows at Victrola Coffee in Seattle and the Fontanelle Gallery in Portland. I can’t find a Web site or any listing for current shows, but I’m sure he’ll show up around here again.

4. Tim Kapler - drawings/doodles. It’s been a mere two months since I discovered Tim Kapler. I reviewed his show of drawings at the Swiss. Kapler is young and self-taught. His inventiveness and skill belie his lack of formal training. I think Kapler has a good chance of making a name for himself.

5. Randy Hayes - Southern expatriate. Not once, not twice, but three times in the past few years a painting by Seattle artist Randy Hayes has been the one of many in a group show at Tacoma Art Museum to make a lasting impression. Combining painting and photo-montage, Hayes makes pictures that tend toward but transcend illustration. It doesn’t hurt that Hayes is an expatriate Southerner like me and that a lot of his paintings reflect that heritage. Call them Faulknarian. But it’s much more than that. Check out his painting Dying Light in Venice #1 in the show A Concise History of Northwest Art now showing at TAM, and see more on Hayes’ Web site at www.randyhayes.net.

6. Kathy Gore Fuss - reemergent artist. Kathy Gore Fuss was the second artist I met in Olympia when I moved here in 1988. She was good then. She recently went back to college to get her BFA in drawing and painting from the University of Washington, and now she’s even better.

7. Chauney Peck - I first reviewed Chauney Peck in a 2003 article called “Sexy Fish.” Since then her career has skyrocketed, and her work keeps getting better. Her more recent works are oddly shaped and relatively flat paintings on vinyl. See for yourself at www.chauneypeck.com.

8. Julia Haack - sculpture. Julia Haack’s wood sculptures have a similar look to Chauney Peck’s paintings on vinyl and cut-out plywood forms. Like Peck (I’d love to see the two of them in a combined show), her sculptures are mostly flat and work more like paintings with interlocking patterns within self-contained forms. They’re really beautiful. See examples at juliahaack.blogspot.com and at the Helen S Smith Gallery at Green River College in Auburn.

9-10. Shannon Eakins and Marc Dombrosky - The last two artists to watch are well known in Tacoma and almost impossible to categorize. Conceptual-performance-identity artists Eakins and Dombrosky, who often show together, do a little bit of everything. Their most recent show together in T-town, Phantasm Chasm at Fulcrum Gallery, featured a bullet-shot portrait of John Allen Muhammed. What more can you say? See http://marcdombrosky.blogspot.com and http://shannoneakins.com.
Posted by Alec Clayton at 9:11 AM