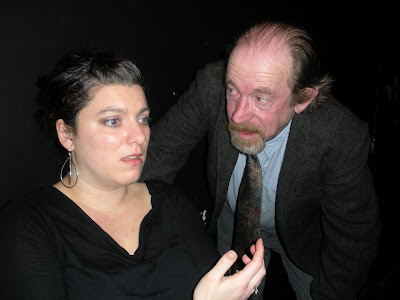 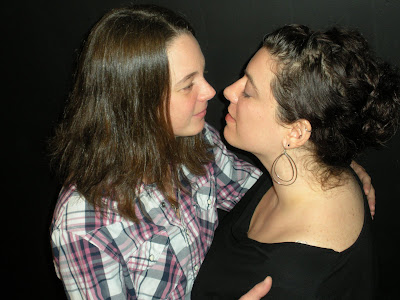 “Stop Kiss,” written by Diana Son and directed by Elizabeth Lord, is a contemporary drama ending a short run this weekend at The Midnight Sun performance space in Olympia.

As with life, this show is tragic, funny and messy. It examines the emotional lives of Callie (Raychel A. Wagner) and Sara (Katie Driscoll), single women living in New York City’s West Village who gradually discover they are romantically attracted to one another. Watching them circle each other is hilarious and touching, and it becomes downright absurd when Callie’s boyfriend George (Brian Jansen) gets in the act.

But the hilarity comes to a tragic and sudden stop when Callie and Sara finally kiss for the first time. They are viciously attacked by a homophobic bystander. Mercifully, the attack is not acted out on stage.

Although a precipitating event in the play, the crime is not what the story is about. It is about the growing and tentative love between two women. The story is told out of sequence in a series of brief scenes that alternate between moments prior to and after the assault. It is a cinematic method of storytelling viewers will recognize from TV shows such as “The West Wing,” for which the playwright was a staff writer.

“Stop Kiss” is an acting tour de force for Wagner and Driscoll, who bring the main characters to life. Chemistry is an overused term, but it’s there for sure. They are in turn funny, expressive, intense, bumbling, hesitant and sad. Every expression seems heartfelt and genuine.

Brian Jansen is a joy to watch as Callie’s boyfriend, who is OK with her attraction to Sara – stopping just short of a stereotypical prurient male interest in lesbian love. Jansen excels in comedic roles, and he portrays George as a slightly arrogant and sleazy doofus who dominates the stage, but when compassion is called for he plays it convincingly.

Dennis Rolly is cast in the unfortunate role of the tough, no-nonsense detective assigned to investigate the hate crime. Detective Cole’s grilling of Callie is written too much like that of a standard TV cop, and even Rolly’s considerable acting skill doesn’t lift this detective above the mundane. Good supporting roles are also turned in by Bonnie Vandver in the dual role of a witness to the crime and as a nurse, and Jon Tallman as Peter, Sara’s former boyfriend.

The story, which is powerful and realistic in both its tragic and comedic moments, is mostly well written with a great ear for dialogue and sense of character, and the acting is outstanding.

The big drawback is there are far too many distracting scene changes. The audience is asked to play along with the deception that we’re watching events in actual lives in New York City, but it’s hard to play along when stage hands are moving furniture during 20 scene changes. Some of the scenes are actually shorter than the time between scenes. In a larger theater, such distractions could have been avoided; here the audience is asked to overlook these necessary mechanics.

When: 8 p.m. tonight and Saturday
Where: The Midnight Sun, 113 Columbia St. N.W., Olympia
Tickets: $12 available at www.buyolympia.com and at the door. Seating is limited. Buy online to assure a seat.
Posted by Alec Clayton at 8:45 AM