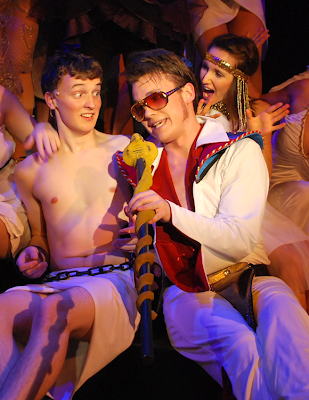 
“Joseph and the Amazing Technicolor Dreamcoat” by Andrew Lloyd Webber and Tim Rice went through many incarnations before ever making it to Broadway and, eventually, community theaters. When first performed in a school in England in 1968, it was only 15 minutes long. When the music was first released it was billed as a sequel to “Jesus Christ Superstar” (also by Webber and Rice) even though “Joseph” was written first and had very little in common with “Superstar” other than they were both based in Bible stories.

Capital Playhouse did an amazing production of “Superstar” last year and is now doing “Joseph,” which is not in the same class as “Superstar” or as spectacular as some of Rice and Webber’s other musicals, but it is highly entertaining and you tend to forget the other shows once the singing and dancing starts – which is immediately because this show is all singing.

The performers at Capital Playhouse could sing random pages from Webster’s and bring audiences to their feet.

The set by Bruce Haasl and lighting by Matt Lawrence are wonderful. The set consists of a series of risers and doors that are created as if seen from a worm’s eye view (distorted perspective).

The doors are mostly blue with tan door frames, but the colors change from blue to violet to green and from red to orange with changes in the light. One of the doors swivels down to become a stairway and another becomes a series of props ranging from the desk on which Potiphar counts his money to palm trees in a desert.

Adding immensely to the pleasure are the colorful and inventive costumes by Audra Merritt, from loin clothes and robes to a tuxedo with short pants to a 1920s-style almost see-through flapper dress, and finally to Joseph’s fabulous many-colored robe.

The cast, with the exception of Jeff Kingsbury hamming it up as Jacob and Potiphar and Melissa Backstrom musically narrating with a sultry voice that shakes the rafters on the high notes, is mostly pretty young.

The large ensemble cast sings and dances to songs that range in style from country and western (with choreography reminiscent of “Seven Brides for Seven Brothers”) to a beautiful and haunting dirge sung by Joseph in prison, to a rousing Calypso number.

There’s a lot of rhythmic and athletic movement in this very small venue.

To pull it all together, Capital Playhouse brought in a professional choreographer, Richard J. Hinds, associate choreographer for the Broadway musical “First Wives Club.”

Hinds has choreographed “Naughty!” and “The Happy Embalmer” for the New York Musical Theatre Festival and Disney’s national and international tours.

The one thing that doesn’t work is the motorcycle, which is featured in the lobby display for sponsor Northwest Harley-Davidson. The Hog was slowly and clumsily pushed on stage at one point.

On a bigger stage with lights and the motor running, it could have been a great surprise, but here it is both expected and disrupting.Everything else is quite enjoyable.

With all three matinee performances and several others on a waiting list after opening weekend, remaining tickets are going fast.

My first thought was that I'll bet you're glad you're a senior. Then I realized that you probably don't have to pay--just flash your press card and walk right in....

Plus I get paid for it. Are you jealous yet?

Yes, Alec, thank you very much for pointing out what a wonderful, wonderful life you have compared to my own pitiful little existence.