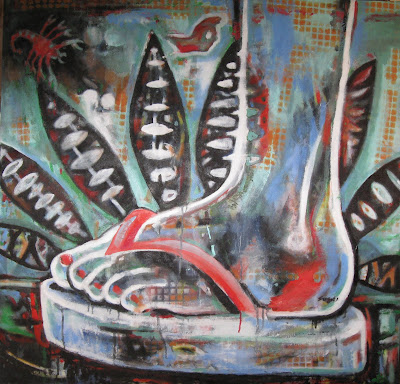 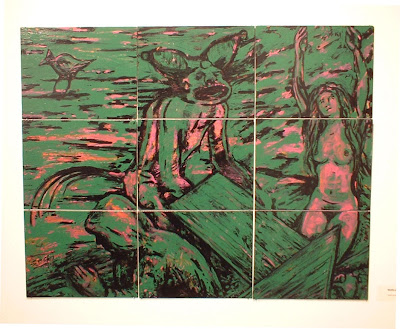 Steven Suski’s paintings in his solo exhibition at South Puget Sound Community College have the look of outsider art. “Outsider” is a label generally applied to self-taught and/or mentally ill artists. To the best of my knowledge, Suski is not mentally ill, and I don’t know what kind of training he has had, but his paintings have that look — wild, somewhat crude and primitive looking, with highly personal iconography. Makes you want to get into his head.

His drawing style reminds me a lot of Fay Jones.

Suski finds old paintings in such places as garage sales and thrift shops and paints over them, always allowing a little bit of the original to show through. He also paints over his own earlier paintings and collages. The results are textured and layered paintings with odd imagery and hints at other images like time capsules in found art, as if mid 20th century art were something excavated from an ancient culture. He paints mythical figures, noir detectives, super heroes, mysteriously sexy women and strange forms that look like human organs. His figures are painted over and under textured and patterned backgrounds. The paintings hint at narratives that are never fully fleshed out.

"Planted Foot" and "Foot Tree" are two large acrylic paintings with contour drawings of feet in thong sandals, both painted with white lines over unrelated images and patterns. "Foot Tree" is particularly inventive in that the feet and legs look like a tree trunk and simultaneously like the torso of a female body. These are among my favorites in the show, along with "Bone Garden" — another painting that makes extensive use of white contour lines. This painting is mostly white-on-white and is the closest thing to an abstract painting in the show. The forms look like worms and human organs, and the painting style reminds me a lot of the late work of Phillip Guston.

Along one wall is a group of paintings that look like images of zombies or similar horror-show creatures. These look a little bit too contrived and overly dramatic, but one of them, called "The Mummy," has some fascinating and energetic brushwork.
Another favorite is a little painting called "Three on a Light." It looks like an illustration from a 1940 detective novel. At the top, three shadowy figures are lighting cigarettes all at the same time and off the same lighter. Underneath — again with what seems to be a Suski signature mark, white contour drawing with see-through imagery behind it — is a hand holding a cigarette pack, but the cigarette pack is a skeleton head. The anti-smoking message may be too obvious, but it’s a good painting. I especially like the painted Benday dot pattern in the background.

"Middle Ages" is one of the most enigmatic pictures in the show. It seems to be telling a story, but I can’t imagine what the story is. The pink and green color combination is almost perfect, but the green should be closer in value to the pink.

"For me, just one of the cool things about Alec's art critiques, is that he always notices something that got by me, and that surprises me (maybe even perplexes me a bit) because I think I am so observant. I think he just looks completely and openly from Alec's point of view 100%, no pretense, and that keeps what he thinks and has to say about the work, always interesting and unique." - Paula Tutmarc-Johnson, Two Vaults Gallery. See Alec Clayton's Visual Edge every week in the Weekly Volcano.