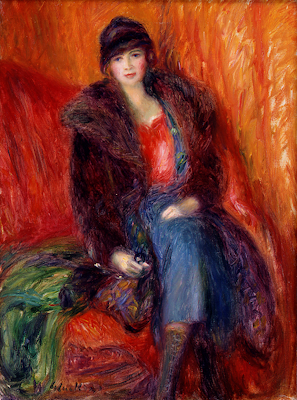 A bit of history at Tacoma Art Museum

To most Americans impressionist art means the art of a small group of late 19th century French artists. But an expanded definition of the movement includes earlier and later works, plus art from other parts of Europe and even America. The Movement of Impressionism: Europe, America, and the Northwest at Tacoma Art Museum offers an impressive sampling of this expanded movement. There’s not a bad painting in the show; yet this show lacks the vitality that marked the movement in France. There are a lot of pre- and post-impressionist works and a lot of paintings that are just barely related to the movement, and taken as a hole these paintings are quieter and less vibrant than the works we commonly associate with Impressionism.

Jean-Baptiste-Camille Corot was not an impressionist, but his colors and paint strokes were luminous and loose relative to traditional paintings at the time, and works such as "A Laborer in the Country near Etretat" in the TAM exhibition influenced the impressionists who followed him.

Among the most famous names in the movement there are few works in this show. They include a pair of lovely bronze sculptures by Edgar Degas and a couple of small paintings and two little prints by Renoir. The Degas sculptures are of dancers. They stand 12 and 17 inches tall and typify Degas’ famous ability to capture gestures and postures as if in candid photographs. These are lovely little sculptures. The Renoir prints include a seated nude and a study for the many paintings he did of two girls with colorful hats and rosy cheeks. I have previously commented on one of those paintings, "Two Sisters," which is also in this show. It is a prime example of his use of glowing pink skin tones and a controlled yet agitated brushstroke. I must confess that Renoir has always been too sentimental for my taste, but with these works I’m beginning to appreciate him a little more.

Most of the works by Americans look more like Ashcan School or Hudson River School paintings than Impressionism. Generally I was not impressed. However, you can’t dismiss John Singer Sargent and Mary Cassatt. Sargent’s watercolor "The Fence" is easily one of the strongest paintings in the show, even if it is quite a stretch to label it impressionistic. It is much more akin to the watercolors of Winslow Homer than to anything by Pissaro or Monet (the latter of whom is sadly missing from this show).

Speaking of the Ashcan School, there is a bit of irony in that William Glackens, co-founder of that school, is represented here with one of the most vibrantly colorful paintings in the show. The Ashcan School was noted for dull and gritty depictions of inner city life, the exact opposite of the sun drenched paintings associated with Impressionism, yet Glackens’ "Natalie in a Blue Skirt" glows with brilliant reds and violets. His brush strokes create energetic patterns within patterns, and the figure does not so much sit in front of the backdrop curtains as emerge out of them in a thoroughly contemporary fashion. Gackens out Renoirs Renoir; he does with a classically seated figure what Monet did with water lilies.

This is not a blockbuster show by any stretch of the imagination, but it is a solid and thoughtful representation of an important moment in art history.