How I became a newspaper man 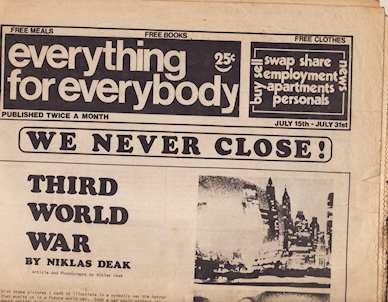 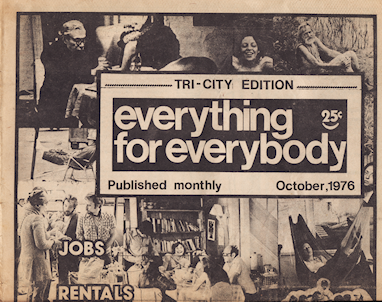 It was 1973, New York. I had recently joined a crazy kind of hippy employment agency/apartment finder/social network called Everything for Everybody and teamed up with a band of handymen who called themselves, variously, The Midnight Carpenters, Uncle John’s Band, and TANSTAAFL (an acronym for There Ain’t No Such Thing As A Free Lunch), and moved in with two of the TANSTAAFL guys, Sam and Mike, in an apartment on 165th Street.

We did odd jobs, rough carpentry, house painting and such. We specialized in late night work. If a restaurant, as a typical example, wanted a wall torn down or a new counter built, we’d come in after closing time, work all night, and have it ready for opening the next day. I was a good painter but a lousy carpenter. I could, however, follow instructions: hold this, cut, here, hammer there.

Mike was the leader of the gang. He lined up the jobs and supervised. It seemed there was no job he couldn’t handle. What a character he was. To this day I have no idea which if any of the things he told me about himself were true. He claimed to have been a poet child protégé under the tutelage of either Carl Sandburg or Robert Frost, I can’t remember which, and to have been a member of the Weather Underground. Over the years he had gone by a variety of names, still carried a gun, and was wanted by the FBI. He was short and muscular, had long hair worn in braids and a heavy mustache. He habitually wore a leather cowboy hat. He was brilliant and cocky and cynical.

Sam looked like Icabod Crane and functioned as a Robin to Mike’s Batman. Tall and lanky with a long nose and loose limbs, Sam seldom spoke, and was subservient to Mike. He had a girlfriend who never came around. I think she didn’t like Mike. I heard about her but never saw her.

The other member of the group was Billy. Billy was the only one who didn’t live with us. He was married and lived in an apartment in Greenwich Village. Billy was little like me. He was about five-foot-four with long red hair that was usually tied up with a bandana. He tried very hard to be a womanizer, but few women were interested. He was disgustingly sexist. How his wife put up with him I’ll never know.

An explanation about Everything for Everybody is in order. It was an organization that claimed to do just what the name boasted—everything for everybody. For a five dollar monthly membership fee you could list jobs wanted, services offered, apartments for rent, or if you were looking for a mate or friend or wanted to start a book club or learn yoga. No limits on what you could list or how many listings. The listings were all kept on index cards in a storefront on 8th Avenue and 10th Street. Members had free access to all listings, so if, for instance, you needed someone to walk your dog you could find a listing for a dog walker and give him or her a call. It was as simple as that. All of the listings were also published in the organization’s monthly newspaper, which Mike and Sam put together. Sam was nominally the editor, but Mike did all the work.

The founder and “benevolent dictator” (what he called himself) was named Jack Scully.

Although we were independent contractors, we thought of ourselves as working for Jack, thus the name “Uncle John’s Band” —Jack and John often being synonymous and, of course, referencing the Grateful Dead song.

I think it was either late August or early September. The night before we had dropped acid and walked from the Bowery all the way up Broadway, through Central Park and parts of Harlem, to the George Washington Bridge, tripping all the way, laughing and singing and marveling at sights such as stones on the face of a Synagogue that looked like something from a medieval castle and iridescent colors from street lights reflected in puddles. Everything was weird and beautiful.

We decided to walk across the bridge, but only made it halfway because Sam freaked out in the middle and wouldn’t go any farther. The bridge swayed in the wind, it looked like a million miles down to the black water, and cars whizzing by were too damn close and too damn fast. It wasn’t exactly surprising that Sam freaked out; it was surprising that he was the only one. Maybe it had something to do with the fact that he was the only one who hadn’t dropped acid.

Anyway, the next night we had to put the newspaper together. It was the first time I had worked on it, and I had no idea what to do. Sam said, “You just glue these listings to the page with rubber cement. Try to keep them straight.” The listings were typed with an IBM Selectric typewriter. Mike was typing new ones while we pasted in the old ones. The newspaper content was about 90 percent listings and 10 percent editorials written by Mike and Jack. The headlines were done with rub-on transfer letters. There were also a few display ads, mostly business cards pasted in.

We worked for a couple of hours until we discovered that there were many more listings than there was space for them. “They won’t fit,” Mike said. “We’ve got to leave a few out.”

He decided which ones to leave out. He cut out half the older listings. You see, people could pay by the month or by the year, or for $100 they could get a lifetime membership, meaning that if someone had an item for sale and nobody was buying it they could run that listing until the day they died. There were some like that: one guy who listed a moving service and another who was selling a book once owned by Woody Guthrie with Woody’s handwritten notes in the margins. It should have been worth a fortune but nobody was buying it. I don’t know how much he was asking for it, but the listing ran for years (jumping ahead, when I left four years later that listing was still running in every issue of the newspaper, and come to think of it, the moving guy and the Woody Gutherie guy were one and the same fellow, an old beatnik whose last name was Star).

We ended up eliminating about 50 listings that in Mike’s judgment were repetitious and unnecessary. We finished the newspaper about midnight, put the sheets in a big flat box and hopped in the A Train to take it to Jack in his apartment on Bank Street in the Village. We used to do a thing we called surfing the A Train, standing up and trying to hold balance with the swaying and lurching of the train without holding on. We did that all the way from 165th Street to 14th Street. We got to Jack’s apartment, handed him the sheets to look over, and Sam let out that we’d eliminated a lot of the listings. Jack went ballistic. He told us that the members paid for those listings and they could not be left out—as if he had to tell us that. He told us to go back and add four pages (for people who don’t know, you can’t add a single page; they’re sheet fed through the printer with four pages per sheet).

So we surfed the train back home and added four more pages. Now we needed filler. Mike wrote an article, and I think I wrote one too. I designed a big ad for TANSTAAFL, creating a logo on the spot and hand lettering the acronym with a felt tip pen, and we found a cartoon and a poem that had been submitted by other people but never used. We worked all night and delivered the finished newspaper to Jack at seven o’clock the next morning. He said it was the best looking edition yet—which was not saying much; I’d seen earlier editions and they were not much to brag about.

It was one of the hardest jobs I’d ever done, and one of the most rewarding. The next week Sam asked me if I would be willing to take over his job of editing the newspaper. He said, “I’m no good at this, and you have a knack for it.”