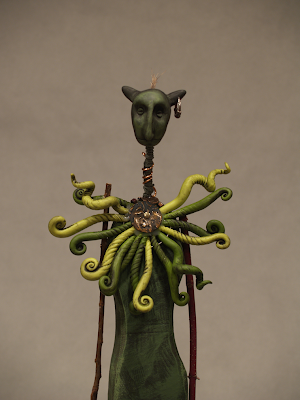 Chris Blivens’ latest show is called CHROMA because each piece is identifiable by color (Chroma defined in dictionary.com as “intensity of distinctive hue; saturation of a color”). His pieces are fetishistic dolls or sculptures made of carved wood or cloth with twigs for arms and wooden dowels for legs and strange markings and ritualistic jewelry and other accoutrements added to or carved into the bodies. Each piece is a distinctive color. There’s a red one and a blue one and a purple one and a green one, and so forth through the rainbow/color wheel. They are not bright colors. They are dull, dirty and worn looking as if they’ve languished on a trash heap or have been recently dug up from an archeological excavation. They look old, mysterious and somewhat frightening — or comical, depending on your point of view.

Most of them have carved wood bodies. The body shapes are abstract forms with smooth curves, flat on front and back (meaning they’re designed to be viewed from the front or the back only, not all sides). At least one of them has a body in the shape of a guitar. In addition to the long, spindly legs and arms, they nearly all have long necks, most of which are wrapped with coiled wire necklaces, some with the addition of feathers, bones, beads, etc. Their heads are skulls or bird’s heads.

There is a strong Northwest Native American influence.

Blivens defines these figures as fetishistic, as surmised from the title of two pieces, which are called fetish dolls. Each of these has a cloth body with patterned markings and what looks to be belts made from hemp twine.

Many of the figures also wear necklaces and bracelets made of Femo clay shaped into bones, feathers, beaks, and other forms derived from nature.

In addition to Blivens’ sculpture there are a number of large, minimalist sculptures by James Kelsey, along with works by Steve Bernard, Marge McDonald and others as part of the citywide Metal-Urge event. Kelsey’s piece that stands just inside the front door is outstanding. It consists of three open-frame yellow boxes stacked corner-to-corner in a manner that almost defies gravity. It stands almost ceiling high and should really be seen outdoors in a natural setting. (There are, in fact, a number of similar works on his Web site at www.jameskelseystudios.com, which are pictured in natural settings.)

McDonald’s "Nobody But Us Chickens" is one of the best pieces in the gallery. It’s a grouping five abstract forms that look like skinned and headless chickens hanging in a butcher shop, and it is made out of the little metal ID bands that go around chickens’ legs.

Bernard’s robot bugs and figures are well crafted and very funny. There’s one that looks like Rosie the Robot, the maid in "The Jetsons," and another, "Jumpin’ Jack Trash," the title of which gives evidence to Bernard’s tongue-in-cheek approach to these sculptures.