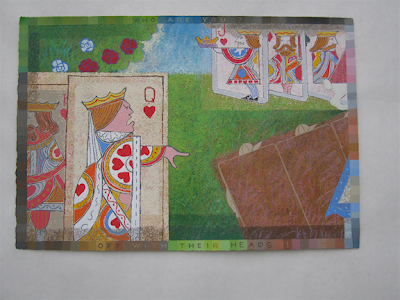 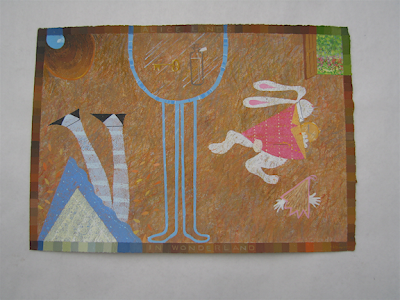 Published in the Weekly Volcano, June 11, 2009
pictured: "Alice Lands in Wonderland" and "Who Are You? Off With Their Heads," acrylic and oil crayon illustrations from Alice in Wonderland by Ron Hinson

It’s been four years since I last reviewed Ron Hinson. At that time he was showing a series of paintings based on Aesop’s Fables — children’s book illustrations elevated to fine art with wit and a fine eye for color and design. What he did for Aesop then he’s now done for Alice in Wonderland, and you can see these delightful paintings at Childhood’s End in Olympia.

On a cursory glance these are mere illustrations, clever and lighthearted. But just as the story of Alice hides its serious intent beneath its surface of light entertainment, Hinson’s illustrations are more artistically sophisticated than they appear at first glance. Like the book itself, these paintings can be viewed on multiple levels.

There are 10 paintings in the show, each illustrating a specific passage from the story. They are painted in acrylic with oil crayon. Each is bordered with a line of squares in various colors or various tones of a single color (or a combination of both). Within these subtly varying squares that march around the outer edges are the hand-lettered titles of the pieces. Most of the paintings have wall texts explaining the passages from the story that are being illustrated, a nice reminder for people like me who haven’t read Alice in many, many years.

Colors graduate in steps from dark to light with no shading or blending so that everything is flat, with backgrounds (grass, trees, water, sky) on the same level as the figures. In some of the paintings forms are symmetrically balanced with everything placed around a central figure, while others are extremely asymmetrical. There is a stippled texture throughout, with, in some places, patches of color painted over what I can only describe as a texture template of fine wire screen. To explain: Hinson lays a screen on the surface, paints over it, and lifts it off — a technique he has used very successfully in a number of his large painted constructions.

In many of the paintings the main figures are oddly cropped on the edge or in corners, such as in "The Queen’s Croquet Game," in which half of Alice’s figure is cut off by the edge of the painting — right down the middle of her face — or as in "Alice Lands in Wonderland," in which she seems to be diving right out of the picture at the bottom.

Another visual trope he uses effectively is when he crops parts of a figure he changes the colors of the adjacent border squares to match, such as in "Alice Lands in Wonderland," in which the border squares are graduated shades of brown but change to blue where they abut her blue dress and to the green of grass where an open door can be seen in the upper right hand corner (a door toward which the bunny is madly rushing).

These illustrations are as good as any you’re likely to see anywhere, in books or in galleries.

Also showing is a continuation of the Marilyn Frasca and John and Robin Gamaelius show previously reviewed in this column.