“Once in a Lifetime” 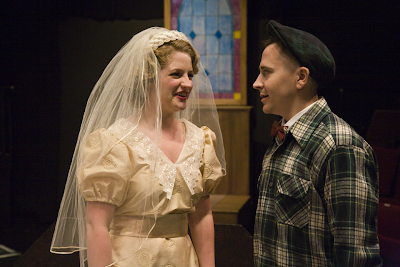 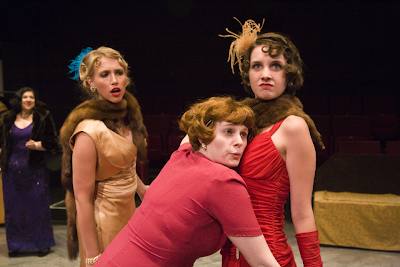 The rollicking comedy “Once in a Lifetime” by Moss Hart and George S. Kaufman was a harsh satirical send-up of Hollywood when first produced in 1930. Today it has lost some of it’s satirical bite, but it is still funny — not to mention a huge challenge to directors and actors because it has big sets, lots of set changes, and a huge cast of outlandish characters who enter and exit the stage in controlled chaos.

Director Marcus Walker and crew at Lakewood Playhouse have decided to tackle some of the play’s biggest challenges head-on by simplifying the sets and, in essence, telling the audience to be patient and listen to the music while cast members perform the many necessary but distracting set changes. It’s actually kind of fun to see how they change things, particularly a set of modular boxes than transform with movable parts from Pullman seats to office desks and tables, but it takes patience too.

If set changes offer challenges for a production in the round, the huge cast and their multiple comings and goings are ideal for this little theater, because they come at you from everywhere. There are five entrances and 22 actors, many of whom play multiple parts. That’s an awful lot of people milling about, constantly chatting and shouting. Credit Walker for getting them all to their marks in time and without running into each other.

In the 1930s “Once in a Lifetime” offered Depression-era audiences escape from their worries, and Walker comments in a program note that we’re in similar “troubled times.”

“…forget your worries and leave refreshed with laughter to face whatever life presents you,” he writes.

George Lewis (Blake R. York) and May Daniels (Nicole Lockett) are a second rate Vaudeville act. Jerry Hyland (Lewis Gorman) is their manager. They decide to go to Hollywood and open a school of elocution after the talkies come in to teach actors how to talk. Through a series of missteps, George -- a constant bumbler -- becomes the power behind the scenes at a major studio and is declared an artistic genius.
York is perfectly cast as George. From his slovenly ways to his boyish infatuation with Susan Walker (Kat Christensen), a would-be starlet, York has the audience pulling for him all the way.

Christensen is also beautifully cast. A 16-year-old sophomore at Tacoma School of the Arts, she is easily believable as a young adult. I love the way she runs about with excited little steps like a speeded-up Charlie Chaplin walk.

Most of the cast members play their roles with exaggerated, over-the-top voice and gestures, the one exception being Lockett, who plays May Daniels as the only halfway sensible character in the play. My only quibble with her is that she rushed her dialogue in the first scene during the opening weekend performance. But she settled down by the second scene and was wonderful throughout.


Some of the more outlandish characters are over done. Dana Galagan, for instance, needs to tone down the histrionics in her portrayal of the self-important and pretentious film critic, Helen Hobart. Luke Amundson’s portrayal of the emotional German film director, Kammerling. is funny, but some of his shouting is hard to understand; maybe he should attend May’s elocution school.

There are many actors in multiple walk-on roles who show great skill. One who particularly stands out for his great energy and ability to assume a variety of roles is Joe Kelly as a bellboy, an electrician, Oliver Fulton and the Tie Man. Also enjoyable in a supporting role is Brie Yost as the frantic studio receptionist.
It’s a fairly long play at a little more than two and a half hours including a 15-minute intermission and a five-minute “stretch break.” It’s slow starting and doesn’t get really funny until well into the first act when our heroes go to Hollywood. But the chaotic climactic scenes make the slower beginning worth sitting through.

WHEN: 8 p.m. Friday and Saturday and 2 p.m. Sunday through June 21
WHERE: Lakewood Playhouse, 5729 Lakewood Towne Center Blvd., Lakewood
TICKETS: $14-$22 with discounts for seniors, military and youth
INFORMATION: 253-588-0042, www.lakewoodplayhouse.org
Posted by Alec Clayton at 7:05 AM