‘Buddy’ goes to the heart of the story 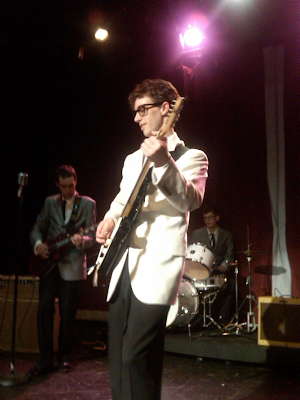 Buddy Holly rocks. He rocked Clear Lake, Iowa, in 1959, and he’s rocking the stage at Tacoma Little Theatre in 2009 in “Buddy – The Buddy Holly Story” starring Ryan Coleman and directed by Brett Carr.

Other than Holly’s wonderful music, the key to this show is authenticity. From vintage microphones and amplifiers to Holly’s teenage backup musicians to actors who look the part of famous entertainers and can uncannily mimic their singing styles, everything seems real. When the emcees on stage at New York’s Apollo Theatre and in the dance hall in Iowa encourage audience participation, the audience at Tacoma Little Theatre responds, because it feels as much like you’re actually there as any such performance I can recall.

The story is a bare-bones biography. We first see Buddy as a raw teenage singer at the KDAV Radio dance party at the Grand Ballroom in Lubbock, Texas, defiantly sliding from a standard country tune to a rocking “Reddy Teddy” and later fighting with his manager and a record producer because they want him to sing country and he wants to rock ‘n’ roll.

We follow him to recording studios in Nashville and in Clovis, N.M., and then to the great Apollo Theatre in Harlem where he wows the audience with some of his most popular hit tunes, including “Peggy Sue” and “Not Fade Away.” There is a brief and delightful comic scene when he meets and proposes to his wife, and then we follow him to the big concert in Iowa with the Big Bopper and Ritchie Valens; and for the next 20 or 30 minutes (who’s keeping time?) the play becomes one huge, rocking concert with the audience on their feet and clapping.

The technical crew does much to add to the feeling of authenticity by making full and effective use of TLT’s revolving stage to seamlessly go from dance halls to recording studios to Buddy’s living room. Lighting and sound by Kris Zetterstrom and Joe Izenman creatively mimic a movie-style fade to condense an all-night recording session into a few minutes. There are some slight problems such as Ritchie Valens’ guitar being too loud and Holly’s drummer not speaking loud enough when not on microphone, but such problems are easily overlooked and add to the realism.

I cannot praise Coleman enough for his singing, guitar playing and acting. He doesn’t attempt to precisely imitate Buddy Holly but emulates his style in his own voice. He becomes Buddy. His bandmates, Jacob Rifenbery on bass and Connor Rifenbery on drums, are outstanding musicians who are as young as the Crickets were in 1956.

Michael Storslee as radio disc jockey and Buddy’s mentor and father figure, Hipockets Duncan, is so natural that it’s hard to believe he’s not a real radio personality transported across time and space from Texas in the 1950s.

Erik Hill ably fills a number of roles but is most entertaining as the emcee for the Iowa show.

Mike Slease is spot-on as the Big Bopper. As should be expected, his singing of “Chantilly Lace” is one of the musical highlights of the show. And Paul Eddy rocks on “La Bamba” as the great Ritchie Valens.

Other notable musical performances include Kevin Freitas’ terrific trumpet playing and his mellow country singing as the lead singer for the Hayriders, Darren Struthers’ saxophone and doo-wop singing, and Jake Westhoff’s guitar playing and his personable performance as Tommy Allsup.

The story is simple, well known by many people and almost superfluous. This play is not really about the story; it’s about the music – pure, unadulterated and raw vintage rock and roll.

There's a phone call of him trying to get out of his record contract that is really touching. Here it is on Youtube. He recorded it for obvious reasons. Here's some background on that call.