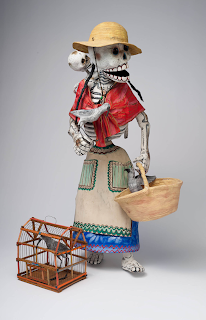 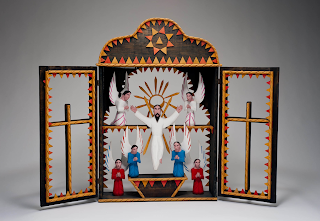 A fiesta of Mexican culture at the Tacoma Art Museum

What a fun show! Folk Art Treasures of Mexico at Tacoma Art Museum, I mean. Nelson A. Rockefeller, former Governor of New York and former Vice President of the United States, owned one of the world's largest collections of Mexican folk art, which was given to the San Antonio Museum of Art and The Mexican Museum in San Francisco after his death. The San Antonio museum has loaned TAM some 80 major pieces from its collection for this comprehensive survey of Mexican folk art.

There are paintings, tapestries, toys, miniatures, painted wooden chests, water bottles and much more featured in this show - including many pieces that were made for Day of the Dead celebrations.

Almost overwhelming in their size and bright color are two eight-foot-tall paper-mache devils that hang high on the wall and a painted backdrop of the Virgin of Guadalupe measuring 11-by-13 feet. This colorful painting has elements similar to surrealistic landscapes, with distortions in size and perspective that almost create vertigo in the viewer. The image of the virgin, as large as the buildings, hovers over the city like a guardian angel. This is a beautiful painting. Interestingly, it was never intended as "art" as North Americans think of art - nothing in this exhibition was. It was painted to use as a backdrop for professional photographers. The work was transported all over Mexico and people posed in front of it for family photos. It was often used as a backdrop for photos documenting religious pilgrimages.

Many of the artists represented in this show are unknown, and none of them were professionally trained. Most of the pieces featured in the show were made for storing or carrying things, for wearing, for play and entertainment or for religious sacrament or celebration. Although made for practical purposes and not for show, the artists display amazing inventiveness and aesthetic sensibility, and in many instances a bizarre sense of humor balanced by reverence for tradition and sacrament.

All pieces are made by hand, often with meticulous detail, and most are made from cheap materials. Nothing in this show was created with the hope that it would someday end up in a museum, but we can be grateful to Rockefeller and the participating museums that they are here now and suitably preserved (many of them are very fragile).

There are beautifully decorated spurs and a meticulously carved saddle and machete case, playful children's push toys, and a number of miniature figures in a glass case that are so small you almost need a magnifying glass to see the intricate detail. One of my favorite pieces is "Huichol Indian Portrait," made of broom straw and wax. I thought it was painted until I got very close and then read the label.

The wall labels are instructive, and I wish there had been more of them, because I wanted to know a lot more about the culture and history and how some of these works of art were made. There is a comprehensive catalog for sale in the museum store, available in both English and Spanish.
Folk Art Treasures of Mexico