Hybrids and Colorbandz™ The artist currently known as Troy Gua 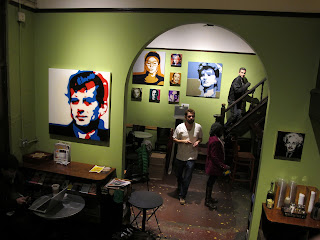 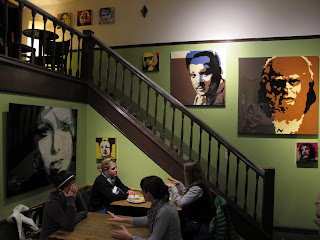 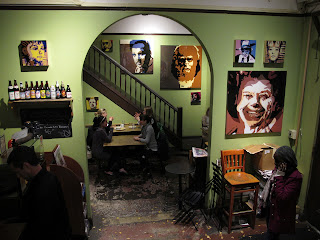 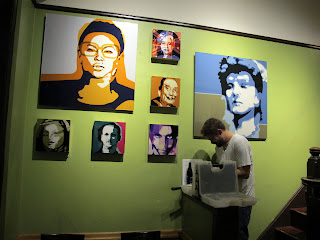 Troy Gua's work is worth the drive to Joe’s Bar in Seattle.

Head north to Seattle or go to the Internet to see Troy Gua. You'll be glad you did.

I was impressed when I first discovered Gua's work in a show at Fulcrum Gallery back in January of 2010. But there should have been a little voice in my head whispering, "You ain't seen nothing yet."

The Fulcrum show featured two extremely different types of work: a haunting memorial to war dead and portraits of historical and pop culture icons in which two or more faces were overlapped, such as Elton John and John Wayne, Martin Luther King and the King of rock ‘n' roll, or the King of Pop and King Tut.

With this show I started to get intrigued by Gua ... even friended him on Facebook. Then I mentioned him in the Volcano's Best of Tacoma issue as one of the "best Seattle artists who sometimes goes slumming in Tacoma."

It would be a stretch of think of the ColorbandzTM in anything other than purely formal terms. Why call them portraits? There are no visible heads or eyes or hair, nothing to relate them to any person living or dead, and yet Gua's friends on Facebook started trying to guess whose portraits he was posting, and some of them seemed to be able to figure it out based on the number of bands or the particular colors and combinations. In some very personal and enigmatic way, Gua was distilling the essence of known personalities into beautiful bands of color.

Getting more and more intrigued, I began to see humorous and profound works such as the "Pissing Contest," which consisted of sculptural forms that, like the ColorbandzTM, appear to be formal and abstract but carried more profound meaning, reflecting Andres Serrano's infamous "Piss Christ" and pitting giant egos against one another in a royal battle. And then Gua wrapped a house in clear plastic in a kind of homage to Christo. In a statement about the project he says that Christo always denies any meaning beyond the purely aesthetic, but that his own work does have greater meanings. You just have to ferret those meanings out.

Gua's art is both conceptual and formally aesthetic. It is filled with humor (except when it is deadly serious such as in the war memorial show at Fulcrum) and with art world references. It is smart and skillfully executed. I urge readers to check out his website at troygua.com.

Gua's pop hybrid images are currently showing at Joe Bar, 810 E. Roy St. in Seattle. He will also in a couple of group shows in December: a video works show at Interstitial Theatre in Seattle and ‘Matryoshka' at Ghost Gallery. And in January Gua will have a show at SOIL Gallery.
Posted by Alec Clayton at 9:10 AM