The good, the sad, and the ugly. 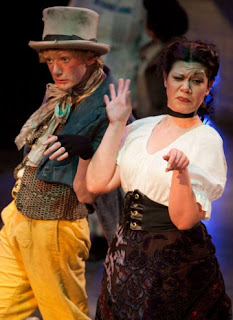 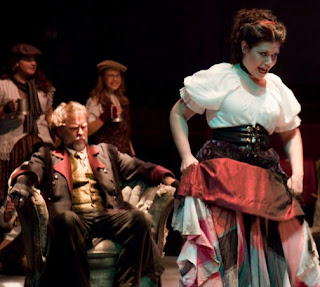 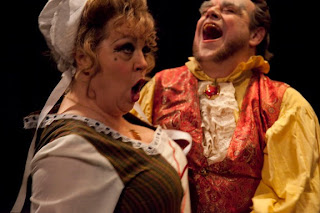 reviewed by Michael Dresdner
With outstanding production values and a big, energetic cast, “Oliver” at Lakewood Playhouse equips itself very nicely, all in all. Thanks in large part to an upbeat treatment by director/choreographer Casi Wilkerson, the musical manages to be a more lighthearted experience than you might expect. After all, it is a dark and depressing story, replete with hunger, homeless children, orphans, kidnapping, arrests, and four deaths, two of them killings.
Based on Dickens’ story “Oliver Twist,” it’s the tale of a thirteen year old boy sold by a cruel orphanage operator to an undertaker, then adopted by a gang of young pickpockets led by the avuncular Fagin. Oliver eventually gets arrested and ends up in the care of a rich man who we later discover is actually… Never mind. Go see it if you don’t already know the happy ending.
I’ve commented before about musicals with casts chosen for their singing ability in spite of weak acting chops. This one, if anything, is just the opposite with excellent actors whose singing prowess pales by comparison. That, and a few casting weaknesses, were the flaws in an otherwise well executed production.
Fortunately, weak lead vocals were, with few exceptions, less of a problem than you might imagine. The rousing and popular “Food, glorious food,” “Oom-Pah-Pah” and “Consider Yourself” are ensemble numbers. Thanks to musical direction by Deborah Armstrong Evans, choreography by Wilkerson, and a wonderful support cast laced with better vocalists than most of the leads, these pieces were all delightful. That’s no small feat, as the logistics of such production numbers can be daunting.
Most of leads were strong actors playing slightly exaggerated characters drawn with broad strokes. Luckily, their various lead songs and duets were mostly rough hewn numbers that came off just fine without operatic voices behind them.
Mr. Bumble (Jeffery T. Weaver) and Widow Corner (Jen Aylsworth) as the orphanage adults pulled off a blustery, bawdy duet that was just perfectly shy of over the top. Ditto for the undertaker couple, Mr. and Mrs. Sowerberry (Alexander Smith and Kaelyn Langer). Smith, who later neatly morphs into the old, stooped Mr. Brownlow, was, as he always is, hysterical, endearing and a joy to watch. Langer adroitly matched him in talent, character and style, which I assure you is nothing to sneeze at.
Fagin was played by veteran Steve Tarry, who turned in yet another excellent performance, something we’ve come to expect from him lately. Bill Sykes (John Munn) was the quintessential dark and dangerous villain, underplayed just enough to be even more menacing. Paired with lover Nancy (Deya Ozburn), their scenes, culminating with his murdering her onstage, were the most intense of the evening.
What was arguably the best overall performance, though, and certainly the most surprising for a young actor, was by Coleman Hagerman playing The Artful Dodger. Another surprise tucked away in the ensemble was Bianca Ponnekanti, a young woman with enough éclat to have caught my eye repeatedly while otherwise buried in large production numbers.
The titular lead, played by Mason Lahd, was sadly weak, if only by comparison to the rest of the adult cast. Such a role, like that of Annie in “that other” orphan musical, cries out for a singer and actor with talents well beyond his apparent age. Mason may get there, but at least the night I saw him, he was not there yet.
The other disappointment was “As Long As He Needs Me,” easily the most famous song that came out of “Oliver.” Like a rose growing amidst a garbage heap, this hauntingly beautiful torch song provides a welcome counterpoint to an otherwise dark setting. It wants a Susan Boyle treatment, delivered with a soaring, sweet, powerful voice. Instead, whether by actor’s or director’s choice, it was done with more angst and less heart wrenching beauty than I would have liked.
As for the production support, it was excellent across the board. The set by Blake York was one of the best and cleverest of a long line of remarkable Lakewood sets, expertly painted by a team led by James Venturini. The costumes, in spite of the enormous cast, were universally superb, thanks to Diane Runkel. Nic Olsen’s lighting design not only worked beautifully, but contained some subtle delights, like a gobo that made Fagin’s chair, with him in it, look like he was perpetually behind prison bars.
On the whole, though it has its less than perfect moments, it is a musical worthy of your time and attention, and one of those classics that everyone should see at least once.
“Oliver”
Nov. 25 through Dec. 23, 2011
Lakewood Playhouse  www.lakewoodplayhouse.org
Photos by Dean Lapin