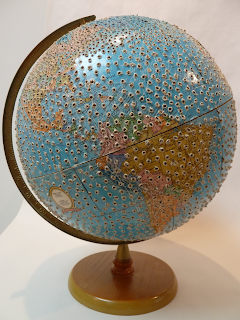 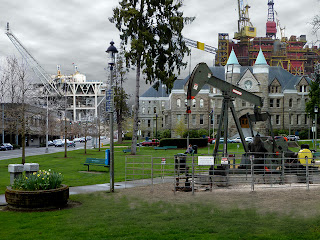 Regular readers of this column know I do my best to avoid Arts Walk. I can't stand the crowds, and you're subjected to a dozen bad works of art for every good work of art. Still, for those who are willing to put up with that, there is some great art to see.

From the hundreds of Arts Walk shows to choose from, I decided to write about just one. It sounds fascinating and appropriate to Earth Day, which coincides with the opening day of Arts Walk. It's the globes project at Tom Anderson's studio at 117 Washington St. NE. Anderson has invited artists to make statements using recycled globes.

"There has been a recurring theme over the last few years of taking a common denominator like the cows in Austin, the salmon in Olympia, etcetera, and seeing the variety of artists' interpretations," Anderson says.

Kathy Gore Fuss is doing a piece called "On and Off Shore Drilling." She's been drilling for oil. As of this writing she's still drilling, and hasn't struck oil yet, but she's put a lot of holes in Mother Earth. Behind her globe float several photos of gigantic oil rigs placed seamlessly in the greater downtown Olympia area, photos manipulated by John Carlton. I saw a photo of her globe in process, and it looks like there's not much solid earth left.

"Currently my work tests the integrity of a material, often to the point of collapse or disintegration," Gore Fuss says. "So far, the globe is still holding up as I drill my way around the world. What better way to remind ourselves of, dare I say, our overly consumptive relationship with Mother Earth?"

Suzie Cowan has covered a globe with song titles that relate to the Earth Day theme. Among those imprinted on her globe are "Whose Garden is This" by Tom Paxton, "Save the Country" by Laura Nyro and "Before the Deluge" by Jackson Browne.

Cassie Welliver is doing a piece titled "Tangled World" with papier-mâché, painting and drawing. "It re-imagines the globe in a more colorful, natural, happy and integrated way using symbols and patterns to indicate continents and items you would find on a child's globe. It also uses a drawing technique called Zentangle that is an increasingly popular meditative pattern/mandala doodling activity," Welliver says.

Also in the show will be Anderson, Ross Matteson, Sally Penley, Suzie Engelstad, Jimmy Ulvenes and others to be announced.

Maps to all venues with lists of participating artists can be picked up at the Olympia Center on Columbia Street and at most downtown Olympia stores, or can be found online at artswalkolympia.com.
Tom Anderson's studio

Friday, April 22 5-10 p.m.
Saturday, April 23, noon to 8 p.m.
117 Washington St. NE, Olympia
Maps to all venues with lists of participating artists can be picked up at the Olympia Center on Columbia Street and at most downtown Olympia stores, or can be found online at artswalkolympia.com.
Posted by Alec Clayton at 4:28 PM