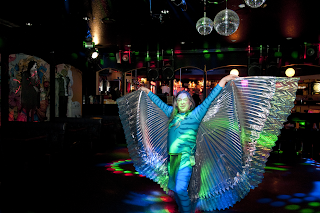 The Weekly Volcano, April 28, 2011
Pictured: a still from Karissa Carlson’s "A Vampire Among Us." Photo courtesy The Evergreen State College

There is a very interesting show at the gallery at The Evergreen State College. It's called "Culture / Subculture." The theme is precisely what the title implies - artists' interpretations of the way we are, our many cultures and subcultures as depicted and/or symbolized in photography, prints, drawings and sculpture from some of the better known artists in the Northwest and in the world, including Kiki Smith, Diane Arbus, Salvador Dali, Jay Steensma, Mary Randlett, Judy Dater - and even a bunch of photographs by Andy Warhol of Keith Haring and friends.

That's part one of the exhibit. The works in that part are rarely seen art from the college's permanent collection. Part two features videos by Evergreen students, faculty, staff and alumni.

Overall I was most impressed with the photographs and with a few of the graphic works, particularly Smith's drawings from the book "The Animal is in the World Like Water in Water" illustrating poems by Leslie Scalapino. The drawings on the two-page spread on display are delicate, inventive and beautifully executed. Perhaps the most impressive work of art is an untitled graphite drawing by Steensma picturing men seated at the bar in a diner. The gray tonal modulations and the line work creating a sense of rapid motion within stillness are very nice.

I did not have time to view all of the videos. I watched part of Shaw Osha's "2 People in a Room," which was too slow and cerebral for my taste, and "Manium" by Nik Nerburn, which explores some of the many myths surrounding the black houses of Olympia. It was somewhat fascinating despite being difficult to hear and having shaky images from a hand-held camera. I also watched Corinne Hughes' "Harmonies: A Poetic Orchestration," which uses poetry, music and random letters to create a harmonious whole that was lovely and soothing. I wanted to see Karissa Carlson's "A Vampire Among Us" because I was intrigued with the theatrical still I saw. Maybe I'll get a chance to go back and watch it.

There is a vampirish-horror feel to much of the imagery in this show - most notably in some of the photographs, with pictures of emaciated figures, people with masks and with expressions of horror or hopelessness. The most striking of these may be a quite famous photograph by Arbus called "Boy With Toy Hand Grenade." This skin-and-bones kid holding a hand grenade in each hand has a painfully strained expression on his face. This photo has been reproduced countless times, and I'm sure most visitors to the gallery will recognize it.

There are also two Halloween-like black-and-white photographs by Ralph Eugene Meatyard that are as mesmerizing as Meatyard's name. One of his pictures is of a group of kids with scary masks. The other is of a naked blond toddler standing by a skull. Pure innocence coupled with death.

Perhaps the most fascinating of the photos is "Door Knob" by Ralph Gibson, which pictures a skeletal black hand reaching through an open door into an open hallway. Shadows and bands of light, including a ghostlike mirror image of the hand, are cast onto the wall of the hallway. This haunting image is like the moment leading up to something frightening in a horror film.

There is also a very nice lithograph by Jacob Lawrence and a lithograph by Salvador Dali called "Lincoln in Dalivision" that is interesting primarily because it employs a blocky pixilated portrait of Abraham Lincoln done before such images were common. I didn't like the look of this print because it was too contrived. But I liked the combination of unrelated images including a cross, a nude and a takeoff on a Picasso drawing - just Dali showing off as usual.

Through May 17, Monday, Tuesday and Thursday 10 a.m. to 5 p.m.
The Evergreen State College
2700 Evergreen Parkway NW, Library 1st floor
Olympia
Posted by Alec Clayton at 8:37 AM