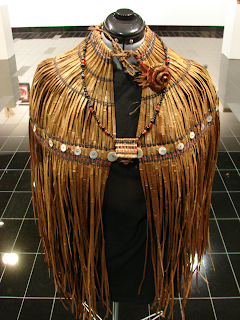 “Cedar Cape” by Patti Puhn
The Weekly Volcano, April 14, 2011
I hate it when people say "I don't know much about art, but I know what I like." Invariably that statement is followed by some really stupid put-down of art the speaker hasn't even attempted to understand.

But when trying to evaluate Native American art, I find myself at least tempted to fall back on that tired old excuse. They taught us absolutely nothing about Native art in my six years of college and graduate art studies, and I don't think aesthetics as we understand it even applies.

The Native American Heritage Art Exhibit opened this week at the Kenneth J. Minnaert Center for the Arts Gallery at South Puget Sound Community College. I enjoyed visiting the show. Some of the works are very attractive, and I appreciate the craftsmanship involved. I especially liked some of the woven clothing by Patti Puhn, a member of the Squaxin Island Tribe. I also liked some of the jewelry, baskets and wood carvings. Not so much the paintings, however. I can suspend my Eurocentric art bias when looking at crafts items, but not when looking at paintings. It's too deeply ingrained. The paintings in this exhibition are not particularly stunning, original or well executed. Everything else was pretty solid.

My only other complaint is the show was too sparse. Just not enough stuff. Usually I'd rather an art exhibit be too sparse than overcrowded, but this show cries out for more material.

Now for the good stuff. Puhn's woven clothing is attractive and well crafted. Her "Cedar Cape" has a rose petal clasp at the collar and long hanging strips of cedar bark that cover the chest area and hang down like fringe. Her "Cedar Vest" is like a short dress or a woman's blouse with an intricate pattern of woven cedar strips. I can't imagine wearing either of these, but they're really nice to look at. I especially like the subtly intricate and repetitive patterns in the vest.

There is a "Bear Feast Bowl" and an "Otter Feast Bowl" by Mike Krise, also from the Squaxin Island Tribe. The bear is made from a carved and hollowed-out section of a tree trunk. He lies on his back, and the bowl part is his belly. It's roughly carved and painted with red and black on the face and claws with a green band around his eyes. He's a mean looking bear. The otter is very similar, but larger and more elaborately decorated. And like the bear, he looks fierce.

Speaking of fierce looking, Lee Sterry's "Dakatoh War Club" is a scary weapon with a long handle wrapped with leather strips and a striking head that looks like the jawbone of a canine with teeth, beads and feathers.

Another nice looking piece is Matt Bell's "Paddle Leadership," a carved and painted paddle with stylized paintings of snakes: a large snake on the blade and a smaller one chasing him from the narrow handle area.