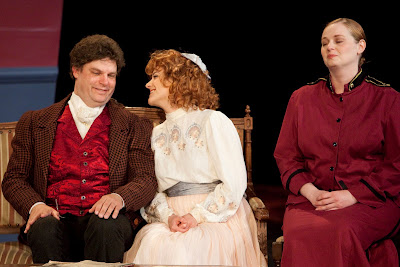 
George Bernard Shaw’s “Major Barbara” at Tacoma Little Theatre is a difficult play to watch. It was written at a time, 1905, when theatrical traditions and audience expectations were much different than they are today. TLT has rigorously edited it to make it much shorter, but it still is a long three-act play, and there are parts that seem interminable.

Shaw was an urbane wit and philosopher and reputed to be something of a cynic and a misogynist. He is very wordy. His biting humor is buried in layers of long philosophical debate. Modern audiences almost have to be students of 19th century English literature to appreciate his wit.

“Major Barbara” is a comedy. It is funny, but not laugh-out-loud funny; it’s more the type of humor you realize was funny after you’ve thought about it. There were very few laughs from the sparse opening-night audience.

In an essay purportedly written to aid in understanding “Major Barbara,” Shaw wrote: “In the millionaire Undershaft I have represented a man who has become intellectually and spiritually as well as practically conscious of the irresistible natural truth which we all abhor and repudiate: to wit, that the greatest evil and the worst of crimes is poverty, and that our first duty – a duty to which every other consideration should be sacrificed – is not to be poor.”

That long sentence epitomizes the wit and style of this play.

The set by Erin Chanfrau, lighting by Jason Burg and direction by Scott Campbell are all excellent and unobtrusive, as is most of the acting, though I found many of the characters to be less than engaging. I like Betzy Miller as the haughty Lady Britomart. I love her walk – head high and shoulders back. I very much like Mike Slease as the pompous Andrew Undershaft. Slease’s proud stance and powerful rumbling voice makes him very believable as a self-made and self-important man who is used to being in charge. David Robertson and Syra Beth Puett, respectively, are very effective as two of the more animated characters on stage, the down-and-out Cockneys, Snobby Price and Rummy Mitchens, and Darrel Shepherd is excellent as another down-and-out character, Peter Shirley.

Most outstanding of all is John Munn in two very different roles: the giggling twerp Charles Lomax and the overbearing bully Bill Walker. Munn throws himself wholeheartedly into the roles and is not afraid to be ridiculous (Charles) or hateful (Bill). I love his lurching walk as Bill and his silly giggle and absurd wig as Charles.

The first scene is a somewhat boring discussion between Stephan Undershaft (Kody Bringman – fine acting despite not much meat to the role) and Lady Britomart.

The humor doesn’t come alive until Andrew and his daughters and their fiancées come on the scene (Leischen C. Moore as Sarah Undershaft, Nicole Lockett as Barbara Undershaft, Jonathan Paul Lee as Adolphus Cusins, and Munn as Charles).

All of act two is highly dramatic, but then it slows down in act three, which becomes a long philosophical debate about morality.

I wish they could have even more severely edited most of the first and last scenes and left just Act 2, but then there would not have been any story. ‘Major Barbara’

Anonymous said...
This comment has been removed by a blog administrator.
June 05, 2010