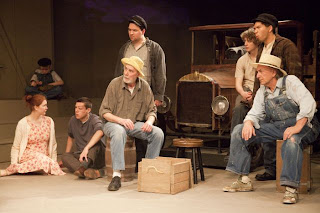 The term “epic” often is loosely applied to stories that do not attain the scale or greatness the word connotes. John Steinbeck’s “The Grapes of Wrath” is truly an epic story, which playwright Frank Galati creatively adapted to the stage and the Lakewood Playhouse is skillfully presenting under the direction of Marcus Walker.

“The Grapes of Wrath” is thought of as a tragic pro-labor and anti-corporate-farming story about the plight of the poor and downtrodden. It is all of that, but it also is a story filled with humor, fascinating and multidimensional characters and some of the most authentic colloquial speech ever written. The playwright retains all of that from Steinbeck’s novel.

The play is huge in scope and requires a huge cast, with 32 actors and musicians performing in the intimate space of Lakewood Playhouse’s thrust stage. Blocking the movement of that many actors must have been quite a challenge. Kudos to Walker and choreographer Katie Stricker for pulling it off beautifully.

A stage production is a team effort. I wish I could list everyone on this team, from the eight volunteers who worked on the set construction to the light and sound board operators. The set by Erin Chanfrau is more symbolic than realistic, with projected images and doors and fence posts made of wood that looks to be very old. There are trap doors and moveable parts to the stage that provide efficient ways to bury the dead, drive an old car out of the garage and even swim in a river with real water that is splashed very close to some audience members. The authentic feel of the set is enhanced with effective lighting by Kris Zetterstrom. The night scene with car lights and projected fire is stunning. In the opening scene, you can almost taste the dust. Costumes by Christina Hughes are convincingly old and worn. Props by Karrie Nevin and Karen Christiensen were chosen with attention to detail and, as far as I could tell, historic accuracy.

The cast is outstanding, from the ensemble to the singers and musicians that provide smooth transitions between scenes, to the principal actors. In particular, they all make the countrified speech sound real and avoid what easily could be clichéd if not insulting portrayals of country folk in the 1930s.

Gabriel McClelland plays Tom Joad with dignity, conveying his quiet strength and barely controlled temper naturally. Samantha A. Camp is absolutely believable as Ma Joad. August Kelly is outstanding as the former country preacher, Jim Casey. Kelly’s role is one of three or four that could easily have degenerated into parody, but he performs with great humor without overdoing it. The same can be said for Virginia Yanoff as Grandma Joad and Grant Bumgarner as Grandpa Joad. These are two of the funniest and most tragic characters in the story, and they are presented with energy and broad expressions and, again, great dignity. Anjelica Wolf as Rose of Sharon has a central stage presence but very little dialogue. Her body language is outstanding.

The ensemble actors, many of whom play multiple roles, are all good. One in particular who stands out for his passionate expression of disillusionment and anger is John B. Morris as an unnamed character who tries to warn the Joads about the perils of going to California.

“The Grapes of Wrath” is a big play in many ways. It is almost three hours long. It is very funny and ultimately heart-wrenching.

The house was far from full the night I saw it. I suspect many people think there’s no reason to see it because they’ve read the book or seen the movie, and they don’t want to sit through a hard-luck story. That would be a shame because there is much in this play that will be entertaining and surprising. 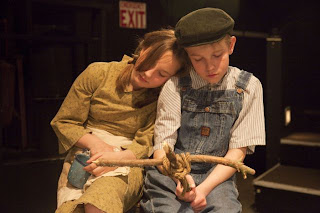