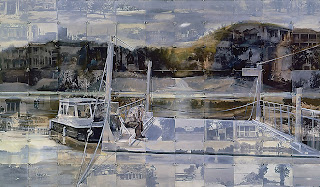 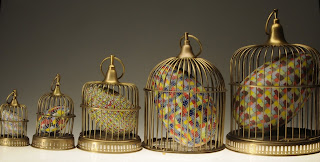 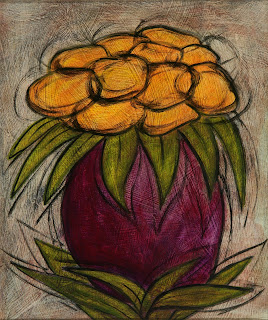 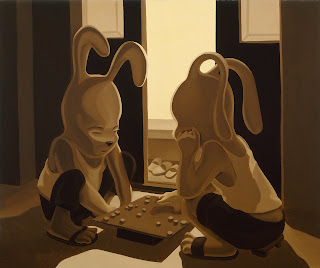 Imagine my surprise when I walked into the fifteenth anniversary Neddy Fellowship exhibition at Tacoma Art Museum and discovered the show was more than twice the size I expected. Normally they show two or three works each from each of the eight fellowship nominees, but being an anniversary show, they’re featuring works by all of the past recipients. That means it’s practically a who’s who of Northwest artists, starting with the very first Neddy winner, Michael Spafford, an artist I rate as easily among the greatest contemporary painters in the Pacific Northwest. His three-panel painting Europa and the Bull dominates one end wall of the gallery. That painting alone is worth the admission cost (especially if you go on a third Thursday).

Close by Spafford’s big painting is another large and very impressive painting, this one by one of his students, Lauri Chambers, whose work shows definite Spafford influence, as well as a touch of Robert Motherwell. These are two of my favorite works in the show, along with Randy Hays’ "The Ferry to Eagle Lake," a monstrous montage of photographs pinned up with push pins and painted over with oil (monstrous meaning large).

Others that are definitely worth taking a good look include acrylics by Juan Alonso, collaborative glass art by Sabrina Knowles and Jenny Pohlman, glass by Benjamin Moore, paintings by Joseph Park and others — and I haven’t even mentioned this year’s nominees: painters Ken Kelly, Margie Livingston, Matthew Offenbacher and Joey Veltkamp, and glass artists Knowles and Pohlman (OK, I did mention them), plus Dante Marioni, Richard Marquis and Marvin Oliver.

Marquis' "Point of Diminishing Eggs" is wonderfully Dadaistic in concept and delicate in technique. It is a glass sculpture of five eggs of different sizes in gilded cages (pre-caged birds) looking equally like Tiffany glass and a Duchamp readymade.

There are two Marioni works, one a set of three large glass urns and the other a case of many clear glass urns, all with his signature ornate handles contrasting with minimalist-shaped vessels.

Matthew Offenbacher’s two paintings, one from 2006 and one from 2009, show how his work has evolved in a few short years from colorful and densely patterned images to  loose, organic forms using a resist technique that almost does away with the paint, leaving a ghostly after image.

I liked Joey Veltkamp’s "Still Life (grid)," acrylic brush drawings of all his collected stuff, but I was disappointed with his pop portrait, "Joey and Dave (at Kim’s 40th birthday)," which is stylistically similar to a Joseph Park painting but not as well executed or as inventive.

There are a few clunkers in this show, but overall is is excellent.