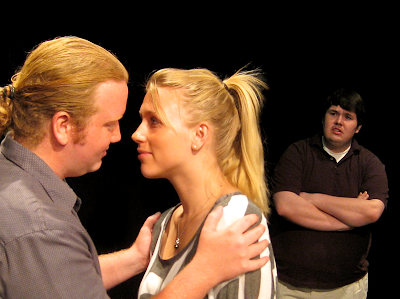 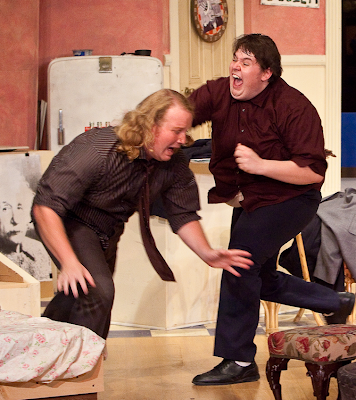 
New Tacoma Little Theatre artistic director Scott Campbell promised a season of comedy, and the revamped 91-year-old theater is starting the new season with a laugh-out-loud glance back at the ’60s, Neil Simon’s “The Star-Spangled Girl.”

What I love about this show is that there is nothing superfluous – no big set changes, no big effects (just a couple of little effects that are quite surprising), no unnecessary characters or rambling monologues – just three eccentric but believable characters and a lot of witty dialogue.

Luke Amundson as Andy and Blake R. York as Norman Cornell are a deliciously odd couple, making two totally outlandish characters seem almost normal. Throw in Gretchen Boyt, a cross between Carol Burnett and Jane Krakowski, as Sophie – the rah-rah, All-American girl from Arkansas who moves in next door – and you’ve got a hit.

Andy is an idealistic radical who publishes the alternative magazine Fallout with Norman, his one-person writing staff, working out of their San Francisco apartment in 1967. Their already crazy lives are thrown totally out of whack when Sophie knocks on their door.

The dialogue is witty and fast-paced, more a parody than an accurate reflection of the era.

Director Elliot Weiner writes in the program that Simon was critical of this play and “complained that he should never have tried to be political.” It is clear that Simon did not have a clear understanding what it was like to be a poor political activist in 1967. The political arguments between Andy and Sophie, which are supposedly the crux of the play, are actually some of the weaker scenes. But the complex love-hate relationships between (separately and each with its own sexual tension) Andy and Norman, Norman and Sophie, and finally Andy and Sophie – not to mention a trio of characters who never appear on stage, including Sophie’s Marine boyfriend; the landlady, Mrs. MacKaninee, with whom Andy has on ongoing relationship to keep them from being evicted from the apartment they cannot afford; and a creditor who keeps calling and whom Andy keeps putting off by pretending to be various other characters.

The casting for this play is outstanding. I can’t imagine any trio of actors fitting their parts better than Amundson, York and Boyt. I have enjoyed Amundson and York in many local productions, but this is their best outing to date. Boyt is a welcome new actor to South Sound stages.

Amundson plays the idealistic and revolutionary Andy with controlled fury. His love for Norman and disdain for Sophie are palpable, and he shows great skills for mimicry in impersonating a Chinese laundryman, an Italian restaurateur and other characters.

Boyt makes you love Norman even when he is doing things that should have him thrown in jail. He stalks and harasses Sophie relentlessly, but he does it with such a sweet and innocent smile and such a look of goofy adoration that you just can’t help but love him.

Boyt makes you believe that Sophie really is a proud and patriotic hillbilly, and her Southern accent is believably subtle.

“The Star-Spangled Girl” was never as big a hit as plays such as “Barefoot in the Park” and “The Odd Couple,” which made Simon one of America’s favorite playwrights. But 40 years later, it is still fresh and delightful. I suspect that one reason neither the Broadway production nor the movie version were big successes was that it is too small and intimate for Broadway or film, but that intimacy makes it perfectly suited for the newly expanded TLT stage.

If you’re going to see it, be sure to note that TLT’s evening performances start half an hour earlier this year, at 7:30 p.m.
Posted by Alec Clayton at 10:52 AM