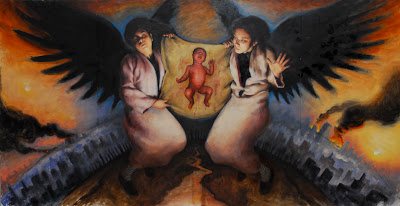 Published in the Weekly Volcano, Sept. 17, 2009
Pictured:"Sudarium," oil on canvas by Jethaniel Peterka


Painter Jethaniel Peterka shows a deft touch and a fertile mind in his paintings and assemblages at Fulcrum Gallery. The show is called Losses and Longings, and it presents a record of how Peterka’s work is evolving and how individual works come into being. Paintings over a period of time showing an evolution of style are paired with preliminary studies to give a snapshot of works in progress.

Much of the imagery and Peterka’s painting style remind us of some of the great works of the Renaissance and of the French Impressionists, but there are distinctively modern and surrealistic touches, and his latest works are more illustrational than painterly, with a raw, dashed-off, sketchy quality. There is a tremendous amount of variety in this little show.
I see hints here of Titian, Valasquez and Carravagio, and even Salvador Dali.

I greatly admire Peterka’s sensitive touch with the brush, but great technique alone is not enough to make art stand out nowadays; there must be something else, and usually something indefinable. Peterka’s paintings seem to have that. His assemblages not so much. They are intriguing, but do not have the power of the paintings.

My favorite painting in this show may be a little figure study in the back gallery titled "Twins." It is a painting of two identical nudes lounging in chairs facing each other. The figure on the right is a finished to a high polish while the figure to the left remains sketchy and unfinished, with preliminary pencil marks showing and dark and light areas loosely blocked in. It is almost like a textbook illustration of the stages of a single painting.

Also in the back room are the assemblages, small works with mechanical parts and body parts, hearts encircled by thorny crowns in two pieces and in another a strange mechanical device with the carcass of an insect. Very strange, but as I said, nowhere near as exciting as the paintings. There are also two very nice drawings from his sketchbook in this back gallery.

The most dramatic painting in the front room is "The Sudarium." This large painting (48 by 25 inches) of two angels in modern dress holding an infant was done as a commission for an album cover for a Brooklyn-based metal band. The angel’s black wings are dark and vibrant and their faces and figures are painted with softly modulated brushstrokes, while the background is painted in a looser style with a stormy sky a la El Greco and a city skyline barely indicated.

Another favorite is "Medicine," which is as serene and classical as "The Sudarium" is romantic. It is a painting of a naked woman in a typical Renaissance pose but with modern drug paraphernalia and nipple rings and a modern-day, shaved-head druggie crouched down behind her in a pose borrowed from Rodin’s "Thinker."

Another excellent painting is "After the Accident," a closeup of a woman’s face in a loose impressionistic style with tones of pink and blue-gray that remind me of the best of Renoir’s paintings. The coloring and paint handling are beautiful despite the horrific subject matter of a bruised and bleeding face.