Marvelous Mystery will Snap Up Viewers 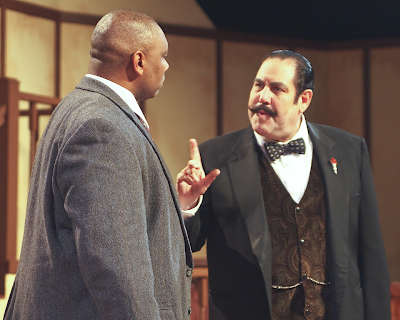 There are two things that make murder mysteries – especially of the British variety – insanely popular: complex and surprising plot structures and oddball characters. Agatha Christie’s “The Mousetrap” at Lakewood Playhouse has both in spades.

Most of the actors are outstanding, although a couple of the characters could have been a little more eccentric.

The timing, the plot and even the choice of music between scenes are all excellent. Unfortunately, the balance between intriguing mystery and entertaining characters gets somewhat lost in the second act. What starts out as a hugely entertaining and comical look at a bunch of idiosyncratic characters becomes ponderous as the inquiry into whodunit takes over.

The most entertaining character in the story, Christopher Wren (wonderfully portrayed by Alex Smith with a whole repertoire of eccentric gestures and expressions) fizzles like a dampened firecracker in Act 2.

It’s as if Christie lost sight of him when structuring the unraveling of the murder, and Smith’s great comic acting chops are washed out in the end. Similarly, Mr. Paravicini, another wonderfully eccentric character, sort of fades into the plot, and there’s little actor Michael Dresdner can do to save him despite all his charm.

But then we come to the crux of a mystery – the surprise revelation of whodunit. I am reasonably sure that most audience members will be completely surprised, unless they have read the book or seen the play.

I saw a preview performance. The set (designed by James Venturini) was not quite complete, but it was close enough to see that it was beautifully thought out with precise attention to the smallest details.

Rachael Boyer is outstanding as the somewhat naive Mollie Ralston. Of all the actors, she is the one who seems most unaffected and authentic. When she expresses anger or fear, it is believable.

Mark Peterson as Mollie’s husband Giles is a commanding presence on stage. He portrays Giles as somewhat haughty but basically likable, even though he might very well be a murderer.

Smith’s Christopher is the wildest character in the play: a fey, histrionic young man who lounges and leaps about the set like a lunatic. Smith is new to South Sound stages, and I hope to see more of him.

He reminds me a lot of Josh Anderson, one of the best comic actors in the area.

Syra Beth Puett is convincingly unlikable as the snobbish Mrs. Boyle. I can’t say any more about her without spoiling the plot.

Mike Slease is gruff and officious as Major Metcalf, a character whose inclusion in the story seems almost superfluous until the end.

Deya Ozburn is excellent as the self-contained and mysterious Miss Casewell. She coolly underplays this woman who dresses like a man and is filled with disdain for practically everyone.

Dresdner is delightful as Mr. Paravicini, providing some of the best laughs in the play. He seems typecast in this role, yet I almost wish he had played the detective Sergeant Trotter (Christian Doyle).

Doyle plays Trotter as a high-strung man who doesn’t stand still for a moment. I would have preferred a more arrogant or aloof character in the mold of Sherlock Holmes or Christie’s more famous detective, Hercule Poirot. (Incidentally, Dresdner’s Paravicini sports a Poirot-style mustache; perhaps it was that and his clipped speech that made me wish he had played the detective.)

Director John Munn does an excellent job with timing and blocking. He specializes in directing mysteries and obviously knows what makes them work.