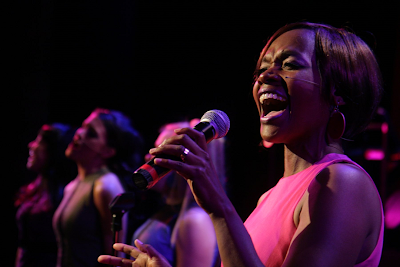 Once again Harlequin Productions offers South Sound music lovers a rollicking rock and roll extravaganza. This one is a little different than their earlier rock shows in that it’s an all-girl show celebrating the girl singers of the 1960s.

There’s no story, although there is a chronological presentation of songs of the era with film projections of historical events. There’s nothing on stage but the four women in front of a band with dramatic lighting and the afore-mentioned projections. But that’s plenty enough because the songs are favorites of many generations and the four women -- Elise Campello, Melissa Fleming, LaVon Hardison and Jenny Shotwell -- have potent voices and huge stage presence.

The show starts off slowly with Hardison standing alone under a red spotlight in a red mini dress of the type that was popular in 1962, with big red -- of course -- disc earrings singing “Feelin’ Good.” The three other women come out in variations of the same dress, each with a different color mod-mini -- purple, green and blue -- and sing do-wop backup to kick off this musical romp.

They take turns singing such early sixties hits as “Da Doo Ron Ron” and “It’s My Party” and “Leader of the Pack.” A projection of statistics on teenage pregnancy precedes a comic version of “Chapel of Love” with choreography and facial expressions putting a spin on the lyrics that’s quite different than the original intent.

Shotwell bursts free of the doo-wop style with a moving “At Last,” and Hardison introduces the early days of women’s liberation with the saucy “Gimme Some.”

Then there is a sudden change of pace with a hauntingly beautiful interlude as Shotwell sings the Joni Mitchell hit “A Case of You” with acoustic guitar and clarinet backup from (Brad Schrandt, soprano saxophone, and Ron Rosenbloom and Bruce Whitney, guitars). This song is not really a ’60s song. It first came out in the early ’70s and was later popularized for a new generation by k.d. lang.

And act one ends with the ensemble singing Nancy Sinatra’s one and only hit, “These Boots Were Made for Walkin’.”

Like the decade it celebrates, the first half of the show is filled with soft, pop songs and doo-wop backup; and the second half comes on stronger with psychedelic and activist music. The second half is much stronger. Hardison is shocking with her growling voice on “Come Together,” accented by great drumming by Keith Anderson.

Shotwell is truly mesmerizing when she sings the anthem of the decade, “Woodstock,” and Grace Slick’s psychedelic “White Rabbit.”

Campello touches tender nerves with the Janis Ian hit “Society’s Child” and Fleming sings a beautiful rendition of “Will You Still Love Me Tomorrow?”

The costumes in the second act were disappointing. Everyone changed into yet another version of the mod dresses from the early ’60s when to fit with the time frame they should have worn bell bottoms and knit vests or peasant style dresses or something more in keeping with the kind of clothes worn by Janis Joplin and Grace Slick or the cast of “Hair.”

I was astounded by much of the music in act two while I was listening to it, but as I thought about it later I realized it lacked some of the grittiness associated with LSD and revolution. Some of the numbers were too perfectly arranged and choreographed. Still I loved it, and I’m sure most people who see it will, whether they lived through the sixties or just heard about it from their parents or grandparents.

this show WOW'd me! All the girls were amazing! Shotwell's Grace Slick was very cool and I think that we'll see great things in Elise Campello's future, her voice is so powerful!