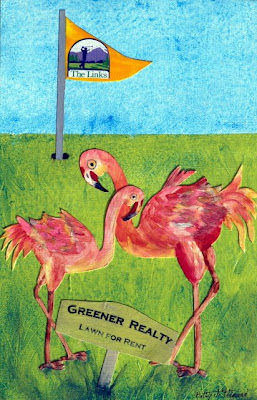 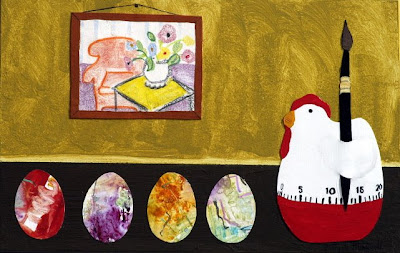 The works of Betty Jo Fitzgerald are on display at Childhood's End Gallery in Olympia.

Betty Jo Fitzgerald has been making art a long time. I’ve been familiar with her work since about 1990, but there’s something quite different about her latest work at the appropriately named Childhood’s End Gallery in Olympia. It looks like she’s entered her second childhood.

This art is playful, joyful and decidedly childlike. There are six acrylic paintings that are each about two and one-half by three feet in size and a group of eight smaller acrylic and collage paintings. The images are primarily of animals — pigs and rubber duckies abound — in fanciful settings. The colors are bright and hot almost to the point of clashing, but tempered with the cool blues of water and sky.

The drawing style in simple and almost clumsily childlike, but obviously intentionally so. There is nothing profound or more than mildly original and inventive about these works. They do not aspire to being great art, but they do aspire to creating a sense of joy and a kind of magic. In this respect they have a lot in common with the Alice in Wonderland illustrations by Ron Hinson that were recently shown in this gallery, but Hinson’s illustrations were much more carefully thought out, with every image having meaning and reference beyond itself; whereas I get the feeling Fitzgerald’s paintings are more spontaneous. She seems to toss in whatever comes to mind.

These are fun pictures to look at. The larger paintings have a flat and slightly dull surface despite some of the bright colors and more purposeful patterns. The collages have more variety in texture and imagery and have shiny surfaces. It’s hard to tell which I like best, but I tend toward favoring the collages.

I visited the gallery early on the day the show opened, and none of the works had title labels.

Typical of the collages and one of my favorites is a picture of a pink pig on the beach. He has a round body and long legs that look more like cow legs than pig legs. The sky is a bright acid orange and there are beach chairs, umbrellas and a row of palm trees. There seems to be little order to the placement of these objects.

One of the better paintings is one with a rubber ducky sitting on the lip of a big bird bath with a child’s inner tube around his waist. The bird bath is gray and heavily textured to look like stone, and everything else is rather flat. Water drips into the bath from a cane spigot.

To reiterate, this is not great art, but it is joyful.

Also showing are landscapes and seascapes on silk by Steven D. Scheibe. These are far too pretty and conventional and bland for my taste, and over priced to boot.