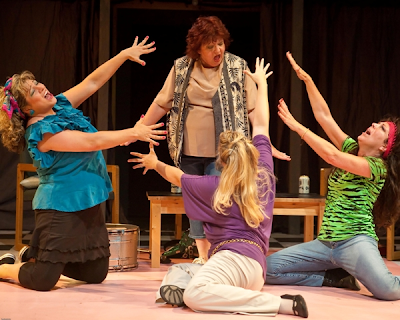 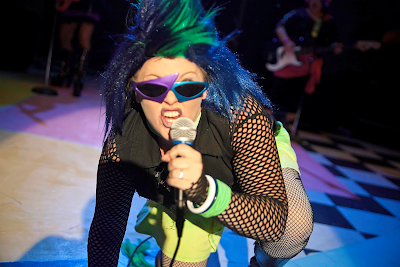 “Angry Housewives” at Lakewood Playhouse is raucous, hilarious and filled with music that in most situations very few people over the age of 20 could stand. But in this case it is a satire of loud, irritating and offensive music, and the singers and actors in this show make it palatable.

With book by A.M. Collins and music and lyrics by Chad Henry, “Angry Housewives” premiered in Seattle in the early ’80s and became an instant cult hit. The setting is not explicitly stated, but there are hints that it may be in the Ballard section of Seattle based on Bev’s Scandinavian accent and Wendi’s job as a drawbridge operator.

Bev (Sheri Tipton) is a single mom, broke and struggling to support her rebellious teenage son, Tim (Aaron Berryhill). Her friend Carol (Kathi Aleman) is overweight and depressed following a recent divorce, and becoming fatter and more hopeless by the minute. Wendi (Dana Clark) is bored with her life but very much in love with her silly boyfriend, Wallace (Marcus Walker). The fourth friend, Jetta (Careese Robertson), is fed up with her controlling lawyer husband, Larry (Blake York), but doesn’t have the guts to do anything about it.

Their lives take on new meaning and excitement when Wendi suggests they form a punk rock band to win money to help Bev by entering a musical contest at Lewd Fingers, a local punk club run by a man of the same name (Bruce Story).

The satire seems as relevant today as it did in the ’80s, and the punk costumes and wigs (costume designer Karen Flory) are wonderfully absurd, even if the wigs worn by Lewd Fingers and Weasal (Steven McCarragher) are overboard. It’s a wonder Weasal can even walk with his huge rust- colored Afro.

The women play their roles with the kind of exaggerated acting associated with television skit comedy (from Carol Burnett to “Saturday Night Live”).

Robertson plays Jetta as a quiet and rather bland woman who is shocked when her friends start peppering their talk with obscenities, but when she finally lets loose on “Eat Your (expletive) Cornflakes,” she really goes all out – and again on the rocking finale. Her beautiful voice is touching on her solo and on the one very sad song in the play, “Not at Home.”

Tipton makes being pathetic funny, tiptoes a tight line between good and atrocious singing with a voice that goes from squeaky to operatic. I love the way she bursts into tears.

Clark’s strong suit is her spirited air-guitar playing and loud buzz voice effects – “Waa, waa waooo!” Her drumming is wonderfully absurd, not exactly on the beat but close enough.

Aleman has a rubber face, and her mooning over Lewd Fingers is precious. It was mostly her acting that made me think of a Burnett skit, especially her wide-eyed expressiveness and her big smile.

Berryhill maintains his exaggerated gnarly punk sneer throughout, and his singing and guitar playing are as bad as any amateur punkster at his worst. His music is intended to be funny, and it is, but it is hard to take. I saw a lot of the audience cringe when he played “Hell School” and later an unnamed song with the line “Stick a wiener in my eye.”

York as Larry is convincing as Jetta’s ridiculously uptight lawyer husband, and Story turns in an uneven but mostly enjoyable performance as Lewd Fingers.

Walker is terrific as Wendi’s fisherman boyfriend, Wallace. I practically fell out of my seat laughing during the first scene with the two of them – and wow, what a kiss he plants on Wendi. Another of the funniest scenes in the play comes when Wallace and Lewd Fingers reminisce about college days and go into an old fashioned vaudeville routine with the song “Betsey Moberly” about “the girl most likely to.”

There are warnings before the play about the use of adult language, but I’ve heard the same words used with much more frequency in other plays where no warning was given. If any warning was needed it should have been for the loud, screeching, off-key music. You just have to put up with a little of that for the comic effect. There’s a lot of really good music as well.