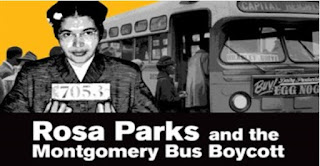 Tacoma Musical Playhouse Family Theater will celebrate Black History Month with a production of the musical Rosa Parks and the Montgomery Bus Boycott directed and choreographed by Jimmy Shields and featuring a cast of eight local actors. LaNita Hudson, most recently seen in The Rocky Horror Show at Lakewood Playhouse and in A Piece of My Heart at Dukesbay Productions, takes on the lead role as Rosa Parks. Also starring are Christen Sabrina Blackwell, DeShanna Brown, Carrie Sleeper-Bowers, Jake Atwood, Johnathan Adams, Donavan Mahannah and Russell Campbell.

On December 1, 1955, Parks, a black woman, refused to surrender her seat on a public bus to a white man in Montgomery, Ala.  Her arrest proved to be a tipping point in American history, inspiring Montgomery’s African-American citizens to organize in non-violent protest under the leadership of the new young pastor, Dr. Martin Luther King, Jr. The newly formed Montgomery Improvement Association held a 13-month boycott of Montgomery’s public transit system that resulted in a landmark U.S. Supreme Court decision striking down segregation on public buses as unconstitutional.

Sixty years after the Montgomery Bus Boycott, Rosa Parks is remembered as “The Mother of the Civil Rights Movement.” With deep intensity and uplifting songs of the struggle, this musical tells her uniquely moving American story about how everyone makes a difference.