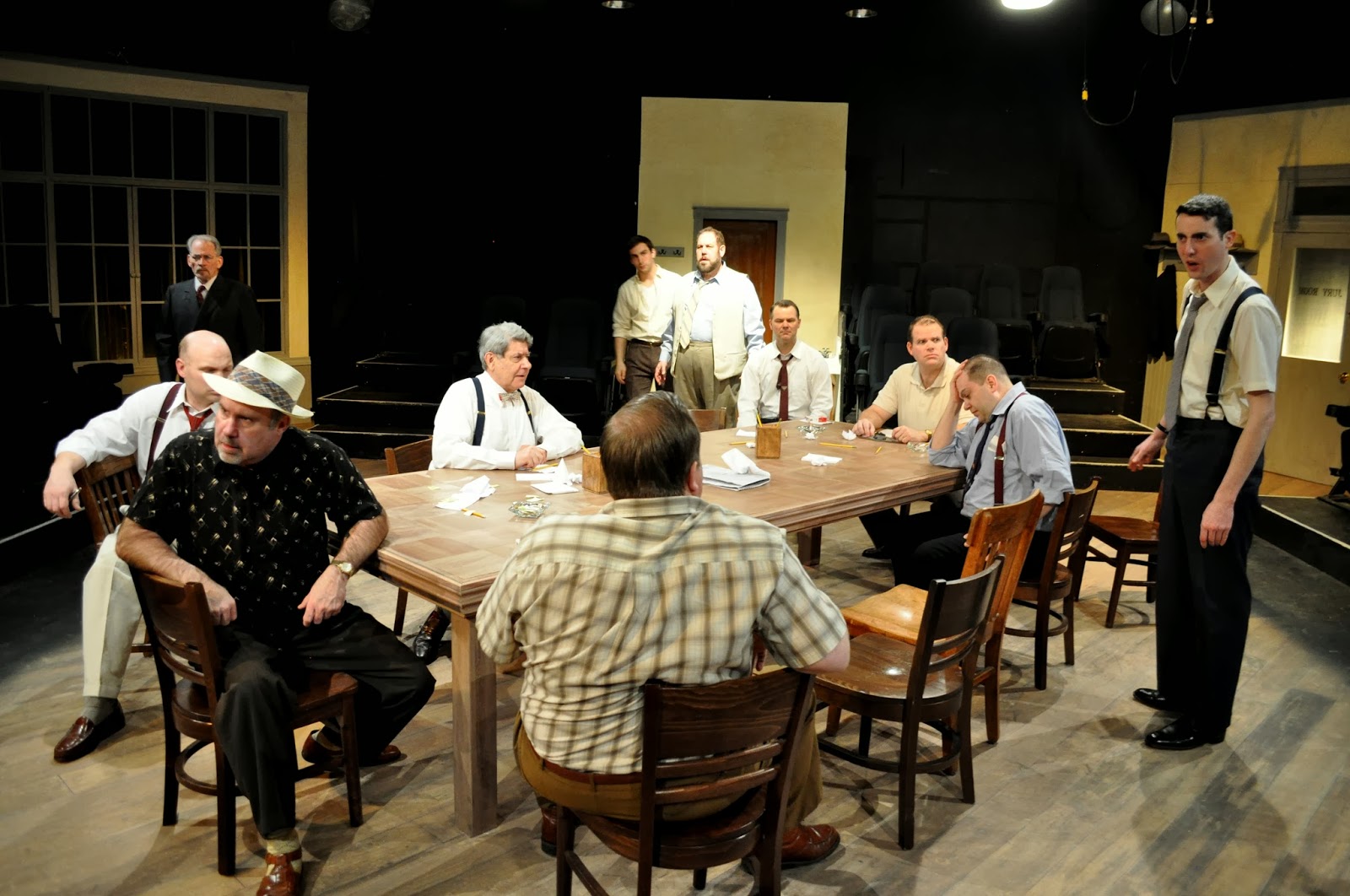 “12 Angry Men,” now playing at Lakewood Playhouse, is as dramatic, engrossing and relevant today as it was 60 years ago when it premiered on CBS Television’s “Studio One.”
The writing by Reginald Rose, the direction by Victoria Webb, and the ensemble acting by a dozen-plus-one actors are all stupendous. Set in the 1950s, the clothing (costumes by Alex Lewington), the language and the dramatic dialogue all reflect the time period without being in the least bit dated.

The entire play takes place in a jury room when the 12 jurors gather to determine the innocence or guilt of a 17-year-old boy accused of capital murder. They take an initial vote, and all but Juror #8 (Bruce Story-Camp) vote guilty. The one holdout is not convinced the boy is innocent; he has reasonable doubt. For the next two hours the jurors argue the case, and one-by-one they change their votes. Some change their minds because of logical exploration of facts they may have not seen so clearly at first, and some because they are emotionally swayed. Others stubbornly hold on to their insistence that the boy is guilty, and their own fears and prejudices become clear.

The writing is as intelligent and believable as anything you might see on stage this or any other year (even if the outcome is predictable from the beginning) and the performances are so outstanding that none of them seem to be acting but actually have become the men they are portraying.

Most outstanding is Christian Carvajal in an award-worthy performance as the spiteful and bigoted Juror #3. This is the best performance I’ve yet to see from Carvajal, and he has turned in some magnificent performances in such shows as “Oleanna” and “Frost-Nixon.” I just hope he doesn’t give himself a heart attack before the show ends.

Also turning in the best performance I’ve yet to see from him is Story-Camp, who believably depicts a man struggling to remain calm and reasonable in the face of unimaginable frustrations, who is unsure of himself but determined to be fair no matter what. In the film version Henry Fonda played this character as a heroic everyman; in this play Story-Camp plays him not as a hero but as a man as real as a stubbed toe.

Ronnie Hill is volatile and mesmerizing as Juror #10, who starts out likeable and expressive and turns into a madman, and Michael Dresdner is captivating as the foreigner who looks at the facts from a fresh and disarming point of view. Rob Reed plays Juror #7 as a loveable lowlife who just wants to get it over with so he can go to a baseball game.

The writer must have been a close observer of people to come up with such a mixed-bag of characters who are each tangible people who at the same time, epitomize well-known character types; and this ensemble cast does a wonderful job of bringing them alive with passionate rawness.
Also outstanding is Webb’s blocking, which makes the usual problems with an in-the-round set seem inconsequential.