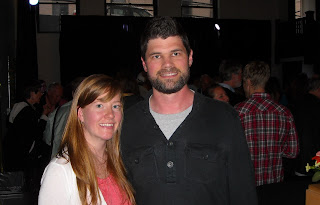 We sure do love us a good prequel, the party before the party. Friday night’s “Sneak Peek” event at The Grand Cinema was the Prometheus to its here-before-you-know-it Tacoma Film Festival (October 4-11), except it actually made sense and involved a lot less alien goo. Attendees answered trivia about the fest (which turns 7 this year) and won prizes, while Rachel Marecle and TFF director Emily Alm launched T-shirts into the crowd.

But besides scoring some free merch, we all really came for the movies. To whet our appetites for October’s celebration, the theater ran four entertaining shorts that appeared in past years at TFF, with one 2012 debut. The idea of escape seemed to link these very different films together - from the gripping drama Ana’s Playground (2010’s Best Short), about a girl who uses soccer to survive in her war-torn neighborhood, to the whimsical The Fantastic Flying Books of Mr. Morris Lessmore (last year’s Best Animated Film), with its reading-is-magic! moral. (Watch it here:
http://www.youtube.com/watch?v=Adzywe9xeIU)

Even the tumbleweed in the 2012 entry Tumbleweed! wants to explore new vistas, or at least another county in Texas. Tacoma’s Andrew Finnigan said his own escape into filmmaking began when he saw Superman at age 10 at the Blue Mouse Theatre. About his craft, this two-time TFF winner for Audience Choice told the audience, “It’s an escape for us (moviemakers)...going into another world and living there for awhile.” Finnigan’s picked for his latest “vacation” the post-apocalyptic Koinonia, a feature currently in post-production. (http://www.facebook.com/koinoniamovie)

We avid moviegoers, who prefer living on the other side of the screen, duck into theaters not simply to leave our world, but to reenter it with recharged imaginations and a renewed appreciation for its wonders. The 2012 Tacoma Film Festival should offer 8 days of chances to do exactly that.
Posted by Alec Clayton at 8:13 AM