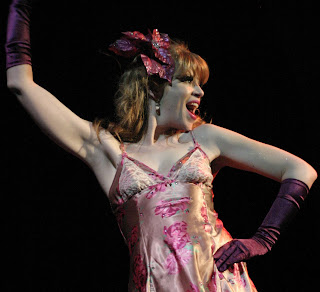 Who knew that Olympia has its own burlesque company? Not many people do, but there is a local burlesque troupe called Tush! Burlesque, and they’re wildly popular among those in the know.
Burlesque — the real McCoy — is a proud tradition more akin to Vaudeville shows than to women stripping in sleazy clubs for men who stuff dollar bills in their G-strings. Tush! member Bettie Beelzebub explained, “Burlesque actually has a historic tradition of beauty, sophistication, humor and class. It comes from the parody plays of the Victorian era, done with humor and often based on political or social issues of the time.” The group’s emcee, Hattie Hotpants, further explained that it’s all about “emphasizing body positivity and healthy admiration for the human form instead of nudity. It's about reveling in the beauty and grace and raunch and humor but also the tease of stripping that is the focus.” She went on to say, “The audience is expected to hoot and holler.”
Their shows are recommended for adults only but by law cannot include full nudity.
I recently had the pleasure of sitting down and talking to Hattie and fellow Tush! Member Nani Poonani, two beautiful and classy women. Hattie is tall and vivacious with reddish-blonde hair and pouty lips. She says she’s been performing since she was 4 years old. She has a degree in Performance Art from The Evergreen State College and has worked as an actor and a singer in many area shows under her other name, Lauren _____. Nani, is shorter, with bright eyes, a curvaceous body, and elaborate tattoos covering her arms and upper body front and back. Before coming to Olympia she danced in strip clubs in the South. “It was strictly small town,” she says. Nani moved to Olympia five years ago with her husband who was in the Navy at the time. She says she started performing with Tush! Because “I was friends with a gal who had a bee in her bonnet about starting a group. I kept trying to put her off.” The friend who helped start the group was Lola Ballgazer (stage name), no longer with the group.
Hattie started working with them because she got a phone call from someone saying, “I got your number from Elizabeth Lord. Do you want to host a burlesque show?” They offered her $100 to host the show, which she accepted. Jokingly now she says, “I have standards, they’re just lower than others.” 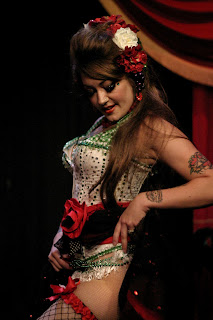 Hattie says they produce all of their own shows, the women design and make their own costumes, and each show has a theme. Having a cohesive theme helps keep all of the numbers similar in tone, she says. “Other troupes do more review or cabaret.”
Their next show will have an enchanted forest theme with mythological creatures, nymphs, sprites and faeries. It will be called Nymph-o-mania and will be a collaborative show with Seattle’s Stripped Screw Burlesque, June 23 at Capital Theater, for mature audiences 18 years and older including mezzanine bar service for patrons 21 and older.
The other members of the troupe are Frida Fondle, Princess Lucky Buttons, Lowa de Boom Boom, Ginger S Mack, Prudence Payne, and their newest member, Wednesday du Monde. They are very protective of their identities and asked that I not use their real name, the one exception being Lauren (Hottie Hot Pants), who asked that I use her first name only. She is well known for work with local theaters and singing groups.
Since Nani has a background working strip clubs, I asked her how that differs from what they do in their burlesque shows. She said:
“I'm glad you asked. The distinction is important to me. In a strip club, you're a canvas, in burlesque, you have to be a cartoon.  In a club, the idea is that the audience comes looking for their particular fantasy, they project the experience they hope to have onto you. There is still a connection, it's important to make eye contact and play with the audience, especially when you're working for tips, but it's primarily about the body. That lets you off the hook a little, knowing that T&A is the main idea. Any little bit of fabulous is enough. You throw out what you've got, and reel in the ones who came looking for it.  You don't have to win the whole room at once, every time.
“In burlesque, it's about creating a shared experience for a large room of people, all in the exact same moment. And it feels much more naked, in a way. When you work regularly in a strip club, everyone sort of knows everyone is faking it and doesn't take anything too seriously. If you fail at something, it's easy to pretend you weren't really trying. Each burlesque act represents a huge chunk of my heart; so much time and thought, sweat and blood goes into it. Every stitch of the costume is mine, the song choice is mine, the concept is mine. I'm responsible for making all of it work for all of those people, not just the ones who came looking for what I'm already serving up. And it's not enough for your removals to go smoothly, it's not enough to keep time with the music, the thing that defines a great burlesque act is how the performer fills the space. You have to throw your persona, intentions, and ideas so far that you slap the cheap seats in the face. It's terrifying!  But that's what's great about it. It forces you to grow. And that is proving to be my greatest challenge (other than designing implausible costumes and having generally terrible balance), training myself to be fully present and authentic on stage. It's a magical thing when it happens, but it can be super elusive when you're juggling tricky hooks, technical difficulties, and nerves. Burlesque is definitely the deep end of the peeling pool.”
Hattie and Nani say they start rehearsing — sometimes individually at home and sometimes as a group — about six weeks before a show. A lot of work and a lot of heart goes into each performance, and it all has to be squeezed in between other jobs and family. In other words, these women are no different than any other women except they are proud of their bodies and enjoy a bit of a tease with style and class.
For more information on Tush! Burlesque to go wwe.tushburlesque.com.
Tickets to "Nymph-o-Mania: Enchanted Forest Follies" are available at www.brownpapertickets.com/Rainy Day Records/Oly Vegan/Box Office day of show.
Other upcoming performances inclue “Tush! Car Wash” August 19 at the Oly Vegan Parking Lot and a show with Darlinda Just Darlinda from New York City on September 5 at Jake's on 4th.
Posted by Alec Clayton at 10:58 AM